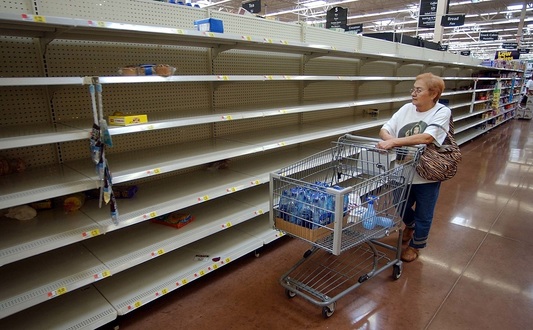 Jack Sprat’s issue number 26 moves us into the area of alleged government conspiracy. In this complaint he points us to a growing number of reports of government stockpiling of surplus food.

As writer Ethan Huff suggests in a story that appeared on the Natural News website in August, 2012, the U. S. Department of Agriculture is "snatching up" millions of dollars in pork, chicken, lamb and fish products to be stocked and frozen for storage as food surplus.
​
A 2015 report in the Before Its News website notes that the Federal Emergency Management Agency (FEMA) has been regionalizing disaster supplies and procuring hundreds of millions of ready-to-eat meals, blankets and body bags. At the same time, the Department of Homeland Security is making “massive purchases of ammunition, firearms and riot gear.”

Huff says the Department of Agriculture claims the food purchases are designed "to help out farmers" much like the old agricultural programs that paid farmers for not utilizing certain acreage for crops. But why is this occurring in a period when extreme heat, draught and radical weather events are challenging the potential harvest of hay, livestock, grains, soybeans, corn, fruit and green vegetables?

The massive meat buy-up is expected to create an even bigger shortage of food and force prices of food even higher at local supermarkets. Huff writes that "the effects of the drought were expected to cause a dip in meat prices as farmers bring their cattle to slaughter," he worries that the government’s "obstruction of the free market could cause a meat shortage" for the average consumer.

So is this meat purchase something abnormal? Is the federal government hoarding food and if so, for whom? The White House says the stockpiling of food is designed to give farmers financial assistance through this difficult harvest year. The food is earmarked for distribution through federal food nutrition programs.

Also the Departments of Agriculture and Defense say they buy bulk meat stocks every year to supply government employees, the military and welfare recipients caught up in federal food programs.

The Huff story suggests, however, that the amount of meat these two agencies are buying is higher than normal.

So the extreme weather is hitting farmers this year, 2016. But it appears that our government has been busy stockpiling surplus foods, at least since 2011. A large part of the nation was suffering from drought, flooding and extreme heat for the past few years and people are beginning to stockpile private amounts of dried, processed food in case of a looming shortage. But an ABC News report noted that the government has been competing with consumers for those stocks.
​
Food companies that prepare cans of freeze dried store-able food were reporting massive sales of foods to the federal government.

Conspiracy stories have been dripping from various Internet blog sites. The Telegraph recently reported that "authoritarian governments" around the world "are aggressively stockpiling food as a buffer against soaring food costs" and as a way of easing public discontent.

In a blog titled "The Economic Collapse," an unidentified writer asks: "Is the U. S. government stockpiling huge amounts of food and supplies in anticipation that something bad is about to happen. Is something about to cause a major economic crisis that will require large quantities of emergency food?"

Well yes, any nitwit with his eye on the sky and in the daily newspaper should have some inkling that climate change is upon us, it is extreme and getting worse, and that it is affecting the harvest of food supplies everywhere in the world. Also the world is staggering under the burden of overpopulation, extreme and unnatural debt, and there is war and hunger and poverty everywhere. And because Christians believe in a prophetic "end of times," a lot of people are thinking something apocalyptic is about to fall on us at any moment.

While FEMA and the Department of Agriculture deny that the US government is buying any more surplus food stock now than it ever has, there is a lot of skeptical unrest in the streets.

As one writer put it: "Nobody could blame the government for storing up some emergency food. That is something we all should be doing. The truth is that the government is taking emergency preparedness very seriously."

After getting caught short by the Katrina disaster and a few major storms since, FEMA has been quick to stockpile not only emergency food supplies but a wide variety of other items to cover all types of catastrophic disaster events. And because of the crippling storms brought on by climate change, FEMA agents have obviously been drawing heavily on this stockpile.

But budget restraints brought on by military overspending and Teabagger pressures on domestic spending have recently been limiting the amount of preparation FEMA and other agencies can make.

Barrett Moore, founder of Triple Canopy, a global security company, said in an interview in 2015 that the government once maintained “stockpiles capable of feeding the entire population for a period of three years. Some 50 years later, the Federal Emergency Management Agency has admitted to a stockpile of a mere six million meals.”

This, with a population of over 300 million people, is only enough to feed one percent of the population two meals for just one day, Moore warned.

He said this in 2015. If true, we can only hope this year that FEMA is back on the hunt for stockpiles of emergency food supplies.

Yes Mr. Sprat, the governments all appear to be competing with the public for food stockpiles. The world leaders, like the people on the street, are all concerned about dealing with the next great disaster. Because of the current political atmosphere in the United States, we cannot be assured, however, that our own government is taking the necessary steps to protect the people in the event of a massive climate disaster and subsequent crop loss.