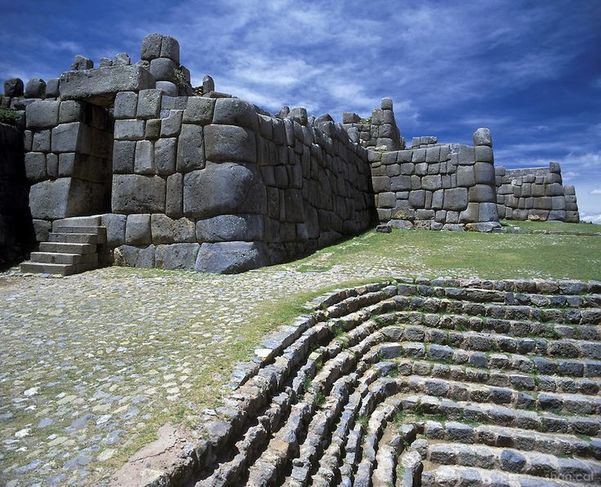 The Mighty Rocks at Saksaywaman

Everybody knows about Stonehenge, an ancient rock megalith in the UK with massive boulders arranged and stacked in a circular pattern believed used by the Druids in the worship of the seasons. The mystery about Stonehenge and other megaliths like it is how such giant rocks could have been carried and lifted in place by a primitive culture.

If Stonehenge baffles the mind, consider the great fortress of Saksaywaman near the Peruvian City of Cusco in South America. It is a giant walled complex of cut rocks, some estimated to weigh as much as 200 tons, and all carefully cut to fit snugly together without mortar. All are also cut in flat or circular shapes to create walls that conform to the overall structure.

The stones at Saksaywaman are believed to be the largest used in any natural rock structure in the Americas. By comparison, the stones at Stonehenge weigh about 25 tons. The stones placed on the Egyptian pyramids are estimated to weigh from 2.5 to 10 tons. There is only one place in the world that contains cut stones that are even heavier. That is on Mount Shoria in southern Siberia, where is found a massive wall of granite stones, some calculated to weigh up to 3,000 tons.

The Saksaywaman fortification was constructed with such amazing precision, with not only stones prepared with smooth and rounded corners but also with a variety of interlocking shapes and walls leaning inward. Researchers have long been baffled as to just how they did it.

Not only were the boulders precisely cut but they were somehow transported to the construction site located at an altitude of over 12,000 feet. At that altitude the oxygen is so thin it is hard to fathom human workers performing the heavy labor required.

Rather than submit to theories of visitation by a “super race” or alien beings, historians and architects have established various thoughts as to just how these massive stones might have been cut and lifted into place with primitive tools. They suggest that the rocks were quarried then pulled by hundreds of workers over giant rolling logs before being lifted by weights into place.

Indeed, some of this kind of work may have been accomplished by the Inca, who were known to have added buildings to the complex. And the above methods of moving smaller stones may well have been used.

Historians and archaeologists have attempted to determine just what civilization existed in the ancient times in the high mountains of Peru. They believe Saksaywaman may have been the work of the Killke culture that was present around the year 1100. The Inca lived there in about the Thirteenth Century.

Archaeologists have found pottery at the site that dates to about 900 AD. This means that the site was occupied at that time. It does not prove that the Killke people were the builders.

The massive stone walls and the location of Saksaywaman high above Cusco has led historians to refer to the structure as a fortress. In fact, the Inca appear to have used it for just this purpose when the Spanish conquistadors invaded in 1536. Yet archaeologists have never determined its original function.

Unfortunately, much of the structure that once existed on this site was destroyed by the Spaniards after they occupied the area. Excavations at the site determined that great towers once existed on the summit plus many other buildings. It was recorded that buildings were ripped apart and the stones used for erecting structures in Cusco. What is left today are the stones that were too large and too heavy for the Spanish builders to even try to move.

There also exists a troubling story concerning large amounts of gold that were removed by the Spanish and transported by ships back to Spain. After the Battle of Cajamarca during the Spanish Conquest of the Inca the Spaniards removed “plates of gold” from what they described as the “Temple of the Sun.” Royal mummies, draped in robes and seated in gold embossed chairs also were defiled during an ongoing desecration of the temple. The gold was allegedly stripped from a magnificent temple known as Coricancha, located in the City of Cusco. But would this kind of sacred treatment also have been applied to the Inca structures at Saksaywaman?
​
Since the Inca builders and craftsmen made major alterations to the original megileth left by the Killke we can't imagine what it looked like in the beginning.