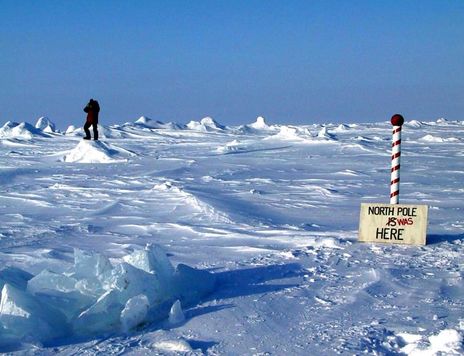 Is The Earth Shifting Poles?

Someday, maybe a few thousand years from now or possibly sooner . . . much sooner . . . the North Pole will be changing places with the South Pole on planet Earth. How quickly that happens will have a significant impact on us all.

The Inuit elders to the far north have been watching the changing weather patterns, the warming ice caps and other signs. They report to NASA that they believe the cause of all the weather changes, the increase in earthquakes and the confusion in migration habits of birds and sea creatures isn’t global warming, but rather because the magnetism of the planet is shifting.

Due North has been moving eastward toward Siberia. The Inuits report that the sun is rising in a different place now, it rises higher in the sky than it once did, and the days are warmer than they once were. They notice that the position of the Sun, Moon and stars have all changed.

Linda Moulton Howe, on her Earthfiles website, reports e-mails and telephone calls about strange rumbling and booming sounds being heard all over the world, from the United States to the United Kingdom, Denmark, France and Sidney, Australia. In addition to this, people are reporting peculiar trumpet sounds, and disturbances in their satellite television and telephone reception. She suggests that something odd is happening on the planet.

Researchers are also reporting a strange humming sound that seems to be coming from the seas around the world. They do not know what is causing this sound.

There also has been an increase in earthquakes, many of them in places where earthquakes are rarely if ever reported. Most of the quakes are small, causing little or no damage but shaking windows and dishes enough that they are being reported in the local news.

Then there are the big quakes, like the 8.9 Magnitude quake that struck Northern Japan in 2011, caused a major tsunami and wrecked a line of nuclear power plants operating at Fukushima, and more recently a 7.9 quake that rattled Nepal, killing at least 7,000 people. The Nepal quake was found to have hit at the southern end of a massive tectonic plate. At the far northern end of the plate, north of Japan, an island rose from the sea and projected itself 900 feet in the air at the exact same time the Nepal quake was occurring.

An analysis by Simon Ludgate that recently appeared in Sci/Environment, Technology, suggests that all of the above events are related to the shifting magnetic poles. Pole reversals are common. They have been observed on the other planets in our solar system and on the Sun every 11 to 13 years. Scientists estimate that the Earth has changed its poles at least 74 times. Nobody knows, however, if these pole shifts happen suddenly or if they take years to complete.

The general rule: The slower the better.

Ludgate writes that “a sudden shift would throw the earth’s balance out so significantly it could trigger lethal earthquakes, tsunami on a scale we can hardly imagine capable of washing right across the United States . . . volcanic eruptions so large and widespread that the resulting ash clouds and gases could blanket the sun’s rays and trigger a new sudden ice-age.”

Also there are several “super volcanos” on Earth that rarely erupt, but if and when they do, they can throw so much magma and hot ash into the atmosphere that the heat of the sun could be blocked for decades. This would trigger a new ice age.

Ludgate said the super volcano under Yellowstone National Park appears to be among the largest in existence. Researchers at University of Utah recently discovered that a lake of molten rock and iron lies under the ground there that measures 11 times the volume of the Grand Canyon. If that volcano ever blows, he said, most of North America could be instantly destroyed.

With all of this information to consider, dare we consider the possibility that our planet is in the process of flipping upside down, turning due north into due south and visa-versa?

Happily, there may be another answer, reports Surendra Adhikari, researcher at NASA’s Jet Propulsion Laboratory in Pasadena, California. In a paper published in Sciences Advances, Adhikari argues that global warming, the melting of the Arctic and Antarctic ice sheets, and reductions in the stored water in world aquifers are changing the balanced weights of the Earth, thus causing the North Pole to shift to the East.

“Climate change is driving the motion of the polar axis,” Adhikari explained.

Scientists at NASA and other institutions that take such measurements have noticed that the North Pole was moving toward Hudson Bay at a rate of about seven centimeters a year for the last century . . . about as long as such measurements have been recorded. But at about the beginning of the twenty-first century, the north rotational pole began moving east, and moving twice as fast as it did before. This is about the same time that the ice began doing some serious melting on Greenland and in world glaciers.

Adhikari said he used data from NASA’s Gravity Recovery and Climate Experiment satellite and calculated the surface changes from ice melt and storage of water on land to come up with his theory. He noted that humans move a lot of groundwater through pumping. Also climate change has brought about dramatic changes in rainfall totals in various parts of the planet.

All of these changes is weight distribution are causing our planet to tip, although fortunately for us, it is only tipping slightly.
​
As long as it doesn’t flip completely over for a while, we probably don’t have that problem to worry about. At least we have a scientific explanation why the pointer on our compass doesn’t show true north anymore.