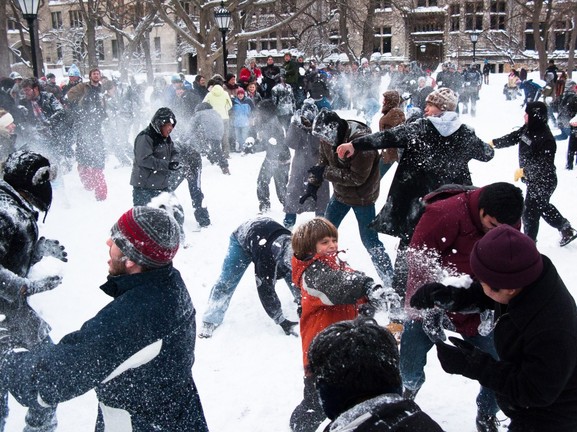 There appears to be a movement among elementary school districts across the United States to ban children from playing all forms of contact games while left unsupervised on school grounds. School authorities cite the reason as fear of lawsuit from accidental injury.

Recess is “a time when accidents can happen,” explained Gaylene Heppe, an elementary school principal at Attleboro, Massachusetts, where the board of education voted to ban games of tag, touch football and any other unsupervised “chase” game.

Not only are schools acting paranoid about potential litigation from playtime injuries on school grounds, but they are over-reacting to potential acts of terrorism by students against their schools. Children have been expelled from school for merely bringing a pair of scissors, or a jackknife on school grounds.

We have seen stories about police being called to schools and elementary age youngsters apprehended and charged after getting into a fistfight . . . something that often happens when children congregate.

One parent in the Massachusetts district complained that the ban on tag and other contact games is unnecessary. “I think it’s unfortunate that kids’ lives are micromanaged and there are social skills they’ll never develop on their own,” said Debbie Laferriere. “Playing tag is just part of being a kid.”

How correct she is. My own experiences growing up about a half century ago were amazingly active, extremely enjoyable, highly memorable, almost totally unsupervised, and sometimes dangerous as hell. Not only did we play wild games of tag and touch football, we explored dark drainpipes that seemed to lead to nowhere, jumped across floating ice floes along the coast of Lake Huron, explored empty and dilapidated buildings and stood by the side of the road in the winter trying to get passing snowplows to bury us with bladed snow.

We got into big fist fights in the boy’s restrooms and I remember one amazing snowball war in an open field separating the Parochial and Public Schools that lasted every noon hour for at least three days before school administrators managed to put a stop to it. I think what really happened was that the weather changed and we couldn’t pack good snowballs anymore.

We snuck into Saturday matinees at the local theater after figuring out a way to pry open the exit doors, played cowboys and Indians and pirates with sticks that we thought looked a little like guns and swords and built forts out of old junk lumber laced with rusty nails and climbed trees. I remember the pure joy of riding the upper boughs of a maple tree in our front yard as it was whipped around in a high wind.

Somehow we all grew up healthy and with all of our members, eyes and body parts intact, even though a few of us sported black eyes, bloody noses and other aches and pains resulting from our misdeeds. It was common to be hauled off to the doctor’s office for a tetanus shot after stepping on a rusty nail.

About the worst event I can remember was the day one of the small children was struck and killed by a passing car after getting off a school bus. It was a pretty serious event and we talked about it for days. But there was no special counseling offered by the school and as far as I know there were no children marred mentally for life because of what happened. We knew that death was a part of life and just accepted it.

I look back on my childhood with fond memories and am happy that I grew up at a time when school officials and “do-good” adults stayed the hell out of the way we played.