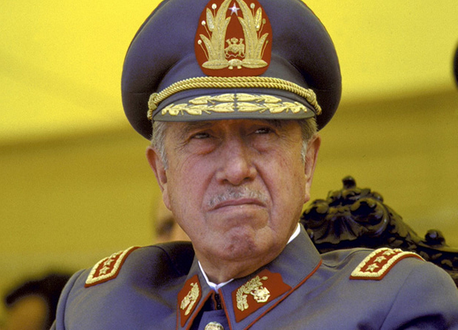 General Augusto Pinochet took command of the government of Chile when he staged a coup in 1973, throwing socialist Salvador Allende out of office. His years of power, from 1973 to 1990 were marked by inflation, extreme poverty and the ruthless murder and repression of opposition leaders.

Pinochet also was involved in Operation Condor, a cooperative movement by several South American governments to dispose of leftist opposition leaders. The number of people who died at the hand of Pinochet was estimated in the thousands.

Born to common people, Pinochet chose a career in the military, where he excelled, rising to the rank of Brigadier General even though he never experienced combat. He was commanding a detention camp for Chilean communists in 1948 when he met Allende, then a senator, who visited the camp. When Allende was elected president, he promoted Pinochet to higher command, and in 1973 promoted Pinochet to commander-in-chief of the Chilean Army.

Just 20 days later, Pinochet staged a coup and took over the presidential palace in Santiago. Allende died in the conflict. Pinochet was named in a four-member ruling junta, but he later seized absolute power of the country.

During Operation Condor, the Chilean secret police was heavily involved in the kidnapping and assassination of prominent opponents of the right-wing regimes in Chile, Argentina, Brazil, Bolivia, Paraguay and Uruguay. The killings were estimated in the thousands.

A national referendum in 1988 forced a presidential election the following year. Pinochet was voted out of office, but he maintained power as a Senator-for-life and commander of the armed forces.

In 1998 when Pinochet visited the United Kingdom for medical reasons, his opponents brought murder charges against in in a Spanish court. The charges were dismissed based on Pinochet’s poor health. But they were renewed again in 2006. Pinochet died before he ever went to trial.
​
He died in 2006 at the age of 91.