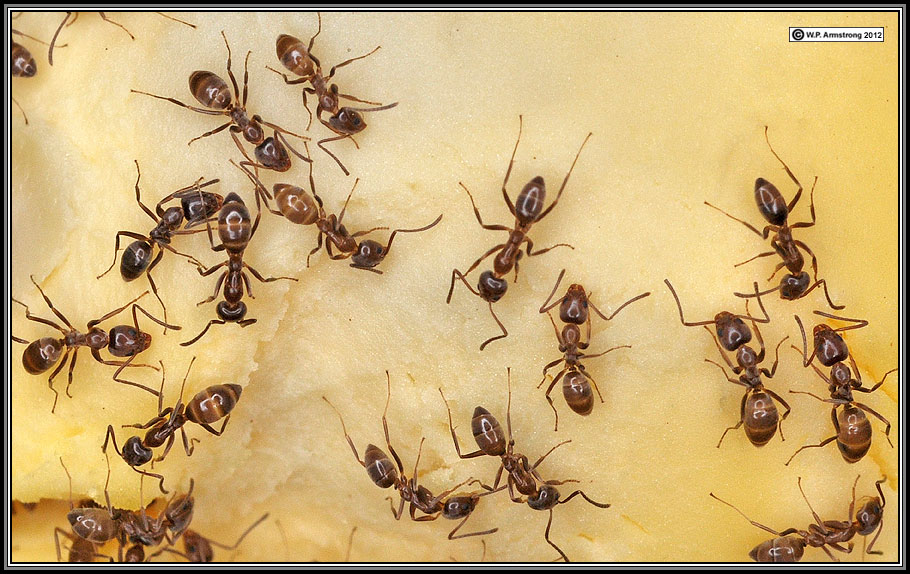 I watched this very small ant work its way across the white folded square of paper towel on my desk. I had just eaten a slice of toast with my morning coffee and even though I was careful not to have left a single crumb, it was obviously attracted by the scent the food had left on the paper.

It was a scout for one of a super colony of those pesky Argentine ants that have invaded our entire drought-stricken state of California this summer. We have been fighting them so long and losing I realized that I had succumbed to just studying these amazing creatures that are sharing my home against my will.

I knew that allowing this little scout to discover any trace of food on my desk would soon bring on an invading army from the colony I decided to reach out with my index finger and squash it. Amazingly the ant instantly sensed the danger and made a run for the edge of the sheet and disappeared on the underside. These little creatures, so tiny they almost have to be studied with a magnifying glass, can move amazingly fast I have found.

What also surprised me as that this tiny creature sensed danger and ran for cover. Are its tiny eyes connected to a tin-size brain so good that it not only sensed my hand coming for it, but it knew to run and hide? What kind of intelligence are we dealing with when we declare war on ants?

Since invading my home sometime in August, this colony has taken over, in spite of best effort to ward it off. No food is left out except during meal time. Garbage is carried out immediately. All cracks and possible places of entry have been calked and sealed. Yet still they come. They are everywhere. I find them all over the kitchen, even in the refrigerator. They are in or on our sinks, my water glass, my coffee cup the moment it cools, my desk, my bed, the cat’s food dish, my bed and all over me. I am constantly picking them from my arm, my face, the screen on my computer, even my toothbrush.

In researching these ants I am glad to learn they are not known to carry disease so their interest in my toothbrush and possibility that I am mistakenly consuming a few in my food or drink is probably not placing me in danger. It is just disgusting to know that it is probably happening.

What I am also learning is that I am not alone in having to put up with these little pests. They are part of a gigantic colony of ants that have literally moved north along the west coast of the United States. And when the weather gets ultra dry as it has been during the past year of extensive drought, these ants move indoors in search of water. They enter buildings through the plumbing pipes and electrical wiring systems. They are so small all it takes is a single opening around a pipe or wire that is large enough for them to squeeze through and in they come. When they are on the move they move like an army, thousands of them in a line of ants moving both ways.

We have tried wiping the floor with heavy duty cleaning solutions that instantly destroy the army that is seen. But once the carcasses are removed the ants quickly return. We cannot seem to wipe away whatever scent they were following to whatever food or water source they were going after. Empty pizza boxes, kitchen waste baskets, the cook stove, kitchen cabinet tops and especially stored food, even though it is sealed, are often found covered with ants looking for ways to get in.

News reporters are writing about this invasion. Like me they are expressing the same frustrations. One report said this particular ant is “considered one of the most invasive species on the planet” and they are presently invading Bay Area homes, where I live “in droves.”

San Francisco entomologist Brian Fisher is quoted in a story as explaining why these little ants also bite us when they get on our body. (It is a tiny little prick that lets us know we have an ant that needs to be disposed of) He says once the ants invade a house they defend their territory. We are considered a threat.

Fisher says that once we have the ants in the house we just have to wait until it rains and the ground outside gets saturated enough to bring the ants back into their natural environment. He said we can have the cleanest house on the block and still be invaded because these ants are largely driven by the weather.

In my study of ants I have discovered that even though they share a hive mentality, there are traits about an ant colony that is shockingly similar to the way we humans live. They build great cities deep in the earth with tunnels sometimes stretching for miles. They are born into a class system with various ants designed to perform different jobs from the queens to the soldiers, workers and scouts.They share tasks, with many ants working together to carry heavy objects. They farm aphids and "milk" them, and enslave other ants to be used as workers and food. And ants will go to war against other colonies.

As a part of the natural cycle of nature, ants play an important role of cleaning up all of the dead things lying around on the earth. They literally eat everything, including dead leaves and dead bodies.

When you think about it, ants, which come in various sizes, are kinda scary. The carpenter ants, for example, work like termites burrowing through the wood framing of houses. The red ants are so ravenous they can gang up on large animals, even humans, eating them alive. Thus I guess I am glad I am dealing with the Argentina ant in my home, which is so small I can barely see one by itself. What bothers me is when there are enough of them marching along together they appear as a black line across the floor.

A writer for another California newspaper, in a personal column, wrote: “I’ve always been a live-and-let-live kind of guy. I respect life, even insect life, so if it’s not causing a problem or spreading disease I won’t just kill it. But these little fellows . . . are a whole different ballgame.

“The overwhelmed my cat food dispenser and have established beachheads in every water portal in my home. I have fished ant bodies out of the water reservoir in my espresso machine – and I must have brewed a few. They’re also crawling on me, from ankle to eyebrow and behind my ears. They have worked my last nerve and turned me into a merciless, remorseless, mass murderer of Argentine ants.”
​
How perfectly his feelings parallel with my own.