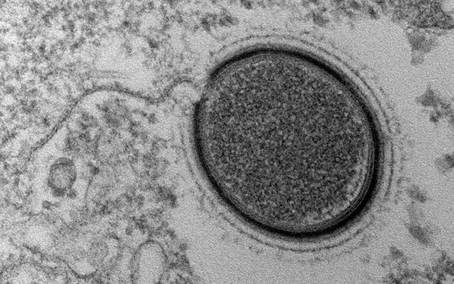 Global warming appears to be creating a new problem for humanity; the unleashing of ancient diseases left buried in the Arctic and Antarctic ice for thousands of years. The discovery of a 30,000-year-old giant virus in the frozen Siberian tundra recently shocked researchers into thinking such a medical issue is very possible.

This newly discovered super virus appears to be harmless to humans. A report in the Proceedings of the National Academy of Sciences said the virus appears to belong to a family of mega-viruses that infect only one-celled life forms like the amoeba.

The problem is that the virus remains alive. It’s revival in a laboratory strongly suggests that the melting ice caps “could eventually resurrect active infectious viruses from different periods,” according to microbiologist Jean-Michel Claverie, Aix-Marseille University, France.

Claverie said he believes “there is now a non-zero probability that the pathogenic microbes that bothered (ancient human, humanoid and animal populations) could be revived, and most likely infect us.” These could include Neanderthal viruses or even smallpox.

“If they have been extinct for a long time, then our immune system is no longer prepared to respond to them,” Claverie warned about the awakening diseases.

He said he and his colleagues have discovered various “giant” viruses like this. When they refer to a “giant virus” they are talking about a virus that is as large as bacteria.

As the warming core of Earth slowly heats the planet and the oceans, there has been a dramatic thawing of permafrost, ice and glaciers that have remained in place for thousands of years.

One mystery has been the discovery of the frozen carcasses of long extinct animals like the wooly mammoth, saber-tooth tiger and other creatures that appeared to have been caught in their tracks by a super frost while they were grazing in the northern tundra regions. Some of these animals still had grass and flowers in their mouths when they died.

With climate changes making these northern regions more accessible, humans are already beginning to move heavy mining and drilling equipment into these areas on a quest for oil and minerals. As they dig and drill researchers warn that the chance of disturbing dormant human pathogens will increase.

Microbiologist Brent C. Christner, Louisiana State University, said the danger of new viral invasion among humans is not as serious as one might think. He noted that viruses cannot replicate or mutate without a host. “They have no source of energy. They have to hijack the mechanisms of the host cell.”

But with bacteria it may be another story. It is known that some bacteria can adapt and exist in extreme conditions, including being frozen in ice. Bacteria have been found in Antarctic brine pools. But here, again, when bacteria adapts to extreme conditions like this, they usually cannot function under conditions that humans consider normal.

At least that is what the science community says. We can only hope they are right.