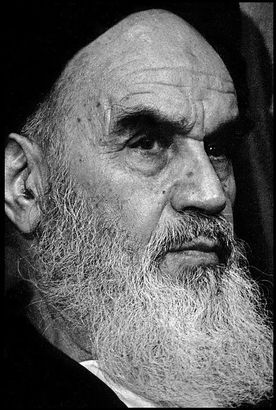 The world remembers the scowling face of the Ayatollah Khomenini during the Iranian revolution that overthrew the old form of government and toppled the regime of Shah Pahlavi in 1979.

While he entered Iran after years living in exile in Iraq and later France, the Ayatollah portrayed himself to the nation and to the world as a holy man who resisted bloodshed in spite of the fact that he and his followers were embroiled in a revolution.

It was true that the man managed his seizure of power in Iran by conducting religious lectures and writing published papers, acquiring an Islamic following that believed in his ideals, and slowly built a following that not only forced a change in government but drove the Shah to flee to exile in the United States.

Historians estimate that the death count from resistance fighting until this point was probably less than 1,000 Iranians.

Once Ayatollah Khomeini became the supreme religious leader of the Islamic Republic of Iran, he soon was named political leader of Iran for life. It was at this point that the executions of the people who had served and followed that Shah began. Nobody knows the true number, but court records show more than 8,000 opponents of the Ayatollah were executed between June 1981 and June 1985. Some believe the bloodshed was even worse, with as many as 60,000 people put to death.

During his training under the Ayatollah Boroujerdi in Qom, Khomeini shared Boroujerdi’s belief that religion should be separate from the affairs of government. He also opposed the close ties that the Shah had with the United States, and the fact that Iran was sliding away from strict Islamic customs and becoming more secularized.

As he grew in power, Khomenini began teaching his followers to return to strict Islamic law. He slowly cultivated a following of supporters that resisted the western practices of the Shaw.

In 1963 Khomeini publically attacked the political direction the Shah was taking Iran. Khomeini was arrested and thrown in prison. His supporters took to the streets and demanded his released. They were met with military force. Khomeini was released in April, 1964 and allowed to return to Qom.

Khomeini again began publically speaking out against the Shah, claiming that the government was “soft” on Israel and saying that all Iranians were becoming slaves to America’s Western ways of life. It was not long before Khomeini was again arrested and this time deported to Turkey. From there he moved to Najaf, Iraq, where he continued his teaching and writing for the next 13 years.

His lectures, many of them taped and smuggled into Iran, continued to draw a growing number of followers. During this period Khomeini developed a plan for revamping the Iranian government that would be founded on Islamic principles and led by clergy.

In 1978 the Iraqi government ordered Khomeini to stop his political activity or leave Iraq. Thus Khomeini chose to move to Paris. Within weeks the people in Iran began protesting in the streets. When the Shah fled to the United States, Khomeini was declared the Supreme Leader. He returned home to cheering crowds.

As soon as he was in power, Khomeini and other clerics set to work on writing an Islamic constitution for Iran. It also was the time of arresting and executing supporters of the old regime.

Khomeini remained in power for the next 11 years before his death in 1989. He is remembered as the Muslim cleric that issued a fatwa calling for the death of author Salman Rushdie who published the controversial book The Satanic Verses in 1989. The book is a work of fiction that depicts Mohammed as a false prophet and questions many Islamic beliefs.
​
Khomeini is remembered for his perpetual scowl. During those last crucial years of his life he not only brought about the execution of thousands of opponents, but he established a system of Islamic power over the lives of the Iranians that many believe is helping to generate the acts of terrorism throughout the Middle East.