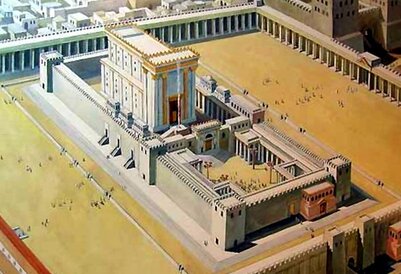 An e-mail inquiring about the cryptology of an ancient castle supposedly erected by the “Iberian Essene” Gnostic Knights Templar at Ourem, Portugal launched us on a fascinating research project that has led us to the strange writings and drawings of Tony Badillo.

While we are not sure about the origins or validity of Badillo’s information, he presents a fascinating theory that links the design of the temple erected in Jerusalem by King Solomon with the strange statue envisioned in a dream by Babylonian King Nebuchadnezzar, as described in the Old Testament Book of Daniel.

As described by Daniel, “the head of that statue was made of fine gold, its breast and its arms of silver, its belly and its thighs of bronze, its legs of iron, its feet partly of iron and partly of clay.”

The king called upon Daniel to interpret this dream, which the prophet saw as a warning of the collapse of the great world empires, beginning with the Babylonian rule to that of the Greek, Roman and European governments that have all risen and fallen since the time of Daniel.

Badillo draws a peculiar parallel between the statue in King Nebuchadnezzar’s dream and the design of King Solomon’s magnificent temple as it might have been seen from the air.

Using descriptive passages in the Old Testament Books of First Kings and Second Chronicles, Badillo notes that the temple was a “rectangular building with a triple-tiered row of cells on three of its sides, west, south and north, with the entrance on the east.” He suggests that the building’s floor plan and even the holy items put inside were secretly designed to contain the hidden form of a man. His drawings, found here, help us see the design Badillo had in mind.

What we find significant in this concept is that the most important room in the temple is the Holy of Holies, a gold plated room in which was placed the most sacred object the Israelites possessed, the Ark of the Covenant. Within the design, this room was located at the head of the human figure. The Israelites believed God dwelt within the Ark of the Covenant. God spoke through the mouth of the high priests who entered this sacred place and communicated directly with the Almighty. Thus it also was the “mouth” of the god.

While the Israelites appear to have believed, as do the people of most world religions even to this day, that the Creator God has a human form, this probably is not the case. They believe this because Genesis proclaims that man was made in the “image of God.” The very word image means not only in the likeness or mirror reflection of the original, but is also could mean a conception or a metaphor of what the Creator intended us to be.

As humans, we occupy bodies that evolved from the animals of the Earth. Thus the living Mother Earth is or true “mother” while the divine creator placed the light, or the spirit that is uniquely us, within these bodies. Because the Creator exists on a much different plane, and perhaps in a different dimension, it is not necessary that he has a body designed to occupy the planet on which we live. Nature does not waste energy or make grave errors in design without creating a mutation that will not be successful. So why would the Creator do this with humans?

Thus if the information is correct, this tidbit of knowledge offered in the writings of Badillo , and long held as a great secret under lock and key by the ancient priests who designed the temple and carefully hidden ever since by the Knights Templar, the Scottish Masons and numerous other secret orders has been right in front of us all the while.
The God lives within the head of man. The God is the light, the spark, the spirit that makes us uniquely us. And we are all part of the whole. The entire universe is alive. We exist as minute parts of the living whole, which also is God. When we look in high powered microscopes at the cellular structure of our bodies we find the same sacred geometric designs and motion and light existing there as well.

Thus to find God we must look in, not outward. The ancients knew this. But even then it must have been considered blasphemous to make such a statement. Thus the truth was secretly and brilliantly placed in stone design in hopes that we would always see it.

This may have been why the Romans chose to carefully destroy that original temple, tearing it apart stone by stone, until the sacred design was lost forever.