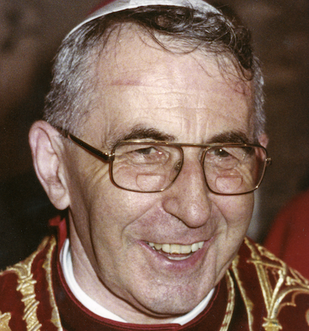 Murder of Pope John Paul I

Except for the reign of Pope Gregory XVIII, which lasted but a few minutes in 1958, Pope John Paul I may have had the shortest recorded time serving as the church pontiff. He died in September, 1978, just 33 days after his election.

Of course there is a conspiracy theory. Books and films have been produced implicating that John Paul's mysterious death was a political assassination. The theorists said they believe the Pope was poisoned by an overdose of Digitalis. He was declared dead of a massive heart attack, although no autopsy was performed. In fact, it was learned that the body was embalmed immediately after it was discovered, thus breaking Italian law that required a 24-hour wait between the time of death and the embalming.

It was known that Pope John Paul I was a non-conformist among Catholic clergy. He refused to wear some of the elaborate costumes prescribed for pontiffs when they made public appearances. His statements concerning Catholic theology may have been troublesome to the older hard-liners.

But author David Yallop, in his 1984 book In God's Name, pointed to corruption in the Vatican Bank as the reason for the killing.

"Jesuit Superior General Pedro Arrupe did arrange for the assassination of Pope John Paul I upon the revelation of the Pope's intention to disband the Jesuit order and distribute their significant interests, including control of the Vatican Bank to other areas of the church."

O'Collins said it was believed that the new pope was alarmed by the Jesuit involvement in the assassination of U.S. President John F. Kennedy, the incitement of the Vietnam War, involvement in the global drug trade and a political execution of Aldo Moro, an Italian political leader.

The Pope's death prevented further efforts within the church to disband the power of the Jesuits over the Vatican, O'Collins wrote.

Theologian Abbe Georges de Nantes devoted most of his life attempting to prove the pope's murder. He collected statements from people close to the pope, and collected details about banking interests and John Paul I's proposed reforms for the church.

There also was a story that Pope John Paul I was a traditionalist, who wanted to reestablish the Tridentine Mass, a liturgy that was discontinued following the Second Vatican Council of 1962. The old mass was celebrated in Liturgical Latin.

Fr. Malachi Martin, an Irish Jesuit priest, controversial writer and frequent guest on the Art Bell nightly radio show, was critical of the Vatican. In his book Vatican; A Novel, Martin outlines a personal theory that Pope John Paul I was murdered by the Soviet Union because he abdicated the condemnation of communism as an atheistic totalitarian ideology. Martin believed that the church was infiltrated by illuminati agents who held positions of high influence.
​
Martin became disillusioned by the church, asked to be released from certain Jesuit vows, and moved to New York where he became an American citizen. His writings were often critical of the Catholic Church.