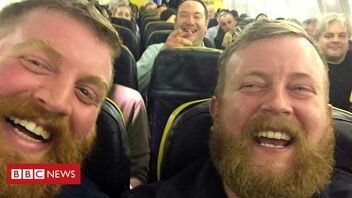 The Strangers Living Among Us

A popular radio show once invited callers who thought they had met their doppelganger, or their visual twin, to call in and talk about their experience. We didn't bother to listen, but the concept was one that caught our attention. Most of us have had the experience of meeting someone we know in a crowd, calling their name, only to find out that it was a case of mistaken identity.

My wife and I once observed a woman in a large department store, while we were separated and shopping in different parts of the store, who we both believed was a daughter that we had not seen in years. This woman looked so much like our daughter we both made eye contact and came close to speaking to her. We were held back by the blank look she returned, and the knowledge that our daughter was in Europe at that time, many thousands of miles away, and that it was totally illogical to assume that she was standing in that store in front of us.

So is it possible that two people from different genetic heritage can come out looking like biological twins? Of course it is. Like snowflakes, there are so many billions of us, the chances of two or more of us popping out of the mix and looking very similar are quite good. It has been said that kings and great world leaders frequently seek out and use doubles, or doppelgangers to make public appearances on their behalf, especially during events in which they may be stepping into harm’s way. And we have all seen the people who have attempted to not only mimic but make themselves look exactly like two of the most famous performers in American pop culture . . . Elvis Presley and Marilyn Monroe. It is amazing just how many "look-likes" have made appearances since these two people died.

All of this strangeness was brought to mind when we recently read a story explaining people who suffer from a mental disorder called Capgras' Syndrome. These people believe members of their family, close friends, and sometimes even their spouse is mysteriously replaced by a doppelganger that is merely posing as the real person. People with this disorder usually do not fear those around them, they just don't believe they are the original person they once knew. After all that this writer has seen and experienced over the years, it is easy to understand how someone might reach this mental state. In fact, we notice that every person goes through constant although subtle changes in personality and behavior, depending on our circumstances, so that even a brief separation of a few weeks or months might allow us to wonder if we are meeting the same person once we are reunited.

While we are all unique individuals, and all of us united because we share the same light or soul, we also are in a constant state of change, adjustment and growth. We also are influenced by the invisible spiritual energies that surround and sometimes possess our bodies. Thus while we remain ourselves, what those around us perceive in us and through us might change, sometimes dramatically, day-by-day. It has been said that we all experience a paradigm shift about every six months, that that everything about us changes, including the history that we thought we knew.

Then for those of us involved in esoteric matters, we must think of the probability of time travelers, and the possibility that we might be meeting ourselves from the future when we encounter that "twin." And if we want to go into other dimensions and think of parallel universes that somehow intersect, the entire picture gets extremely complex. We can surely say that when we look in the bathroom mirror we know that the person looking back is not the young person he was some forty years ago. The changes may have been slow, but they were constant and they have taken their toll. One might then understand why a person becomes confused as to just who we are, even though we might see one another almost daily.