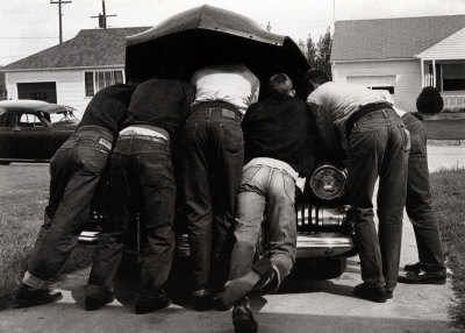 There was a time, when I was young, that every brand of automobile on the market had its own design, when young boys prided themselves on being able to tell them apart, and when it was cool to customize cars to make them look even more uniquely different than any other vehicle on the road.

Many young men learned early how to maintain their cars, going so far as to overhaul engines and when they were knowledgeable enough, redesign their engines to give their cars more power or just do things like add chrome valve covers to make the engine look smart when the hood was up.

It was a common sight to see men with their heads under the hoods of their cars, or an engine raised by block and tackle on a tree in the yard while it was being worked on.

I had friends who shackled the rear springs of their cars so the vehicle took on a sporty look, with its hood raised and the rear part dropped low to the pavement. I liked that look better than I did the fad that followed, which was to shackle the front springs and make the vehicle tilt the other way.

Other ways of simple customizing involved replacing the standard grill with a different one, usually picked from the Warshawsky automobile parts catalog. Every boy in my high school had to have this catalog, even if they didn’t yet own a car.

The most popular cars to own and customize in the 1950's were the Fords with V-8 engines. Guys with shackled down Fords, with fender skirts on the back, cat’s eye covers over the top half of the headlights, special cherry mufflers that gave that engine a deep “blum-blum” sound when cruising slowly through town, were the envy of every young man in high school.

It was popular to customize the interior of cars as well. We could buy special seat covers of just about every design, and matching steering wheel covers. Some guys had dual antennas mounted on both rear fenders. Some mounted fancy chrome hood ornaments although I always thought that unless they were extremely tasteful and the design flowed with the shape of the car, the hood ornaments could make the vehicles look gaudy.

The redneck types didn’t seem to care about art or beauty. They just loaded their cars with all the chrome objects they could find in the Warshawsky catalog, making their old cars look like moving Christmas trees.

There were lots of different brands of cars on the roads in those days, giving the home designers plenty of different automobile types to work with. They included not only the standard Chevrolet and Ford vehicles, but included Studebaker, Nash, Mercury, Plymouth, Dodge, Buick, Oldsmobile, Desoto, Pontiac, Chrysler, Cadillac, Hudson and for a while the Kaiser Frazer. Most of these were manufactured by their own automobile companies. After a while, however, Chrysler, General Motors and Ford Motor Company began consolidating with many of these companies. The cars they made maintained their unique design for the first few years, but gradually all of the American cars started appeared to be coming out of the same mold and running on the same engines. The car-makers excluded from the mergers went out of business.

Now all of the cars on the market look just about alike. Even the foreign cars look like the American cars. That makes looking at passing cars on the highway very dull. There are so many vehicles now, and they all look so much alike, it is like watching a parade of elephants. After a while you have seen enough elephants pass by and want to look at something else.

The last innovative car designers worked for the Chrysler Corporation. The PT Cruiser was a magnificent looking car, one that I might have purchased if I was going to buy a new car. Unfortunately not enough other Americans felt that way about the Cruiser and it soon went out of production. Now Chryslers look like Fords and Chevrolets and Toyotas and everything else.

Just one of those cars now costs more if purchased new than my wife and I spent on our first house. While they offer a lot of comfort and fancy gadgetry designed to make driving fun, even with televisions in the back seat for passengers, few people can afford to buy such cars. And nobody dares to try to fix anything that goes wrong with them. Modern mechanics have to have special training and be licensed before they are qualified to touch the complex computerized electronic systems that are packaged under the hoods.

My first car was a 1950 Chevrolet four-door sedan. I only went so far as to install matching fender skirts and I tried a leopard skin designed steering wheel cover. But I found the cover to be a problem because it had a tendency to slide, so I didn’t feel as if I had complete control of the car. I also tried the cat’s eye cover for the top half of my headlights, but discovered that they reduced the light from the headlights, making it hard to see where I was going at night. As a country boy I thought seeing the road was more important than style so the cat’s eye covers also were removed. That was as far as I went in customizing my car.

I did tear the six-cylinder engine down, install new piston rings and grind the valves while home on a winter break from college. I had a local mechanic let me use a corner of his garage and give me guidance on the job. Cars were easy to work on in those days. There was nothing very complicated about the engines. You just needed to have the right tools and be willing to get very dirty.

I learned how to drain and change my oil, drain water from my radiator and put antifreeze in for the winter. I could change and gap sparkplugs and replace the rotor in the distributer. I could even replace my speedometer cable when it started jumping. After it was discovered that used car salesmen were rolling back the mileage on the cars in their lots to cheat customers, the government ordered all speedometer cables permanently sealed. That meant that speedometer cables also came packed with enough grease to keep them working for the life of the car, which was all right with me.

After the first oil crisis in the 1970s, and the government ordered catalytic converters and other anti-smog devices installed on cars, it got so hard to find the engine under all of the extra added stuff, it was almost impossible to even change the spark plugs. My father had a Dodge with a V-8 engine in it that was so poorly designed that you had to pull the engine from the car to change all of the plugs. Even the best mechanics could never get at one rear plug so Dad never changed it. The car was running really rough by the time he got rid of that car.

As cars become more complex, with computers running the electronic systems, the back yard mechanics nearly disappeared. That was when they began collecting and restoring the great old vintage cars from the 1950's and 1960's. They could still work under the hoods of these cars, and they continued to do their own repairs and customizing. These old cars appear in car shows across the land every summer.

Everybody goes to a professional mechanic now to have even the most simple of repairs made to the newer cars that we drive. And we pay dearly for what we have done. Consequently, now that millions of Americans are either out of work or so underpaid they can barely keep food on their tables and a roof over their heads, maintenance of the family car has slipped to a low place on the family budget. We see more and more cars going around with mufflers fallen off, bald tires and engines running so rough you wonder if the car will get the driver safely home.

It is only a matter of time before those cars fall completely apart, or the drivers get harassed by police and the vehicles get parked for good.

What America desperately needs now is good public transportation systems, not only serving local communities but linking the towns. If we had good reliable rail and bus service, we could use it to go to the grocery store, get to work, and go see relatives in nearby communities. The automobile should, by now, have outlived its usefulness.
​
Unfortunately big business interests do not see it that way.