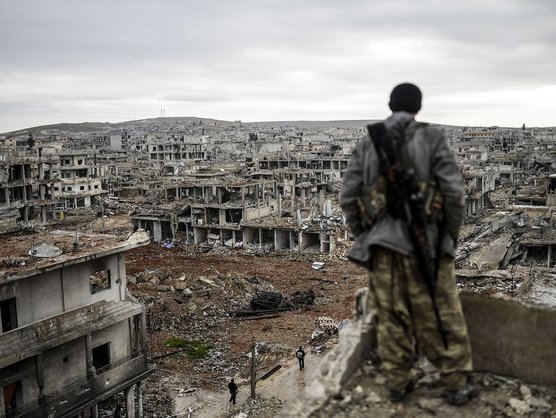 The U.S. corporate media is not telling us the truth about the strange conflict occurring in Syria. That may be because American reporters are too busy staying on top of the insane national political events. But it may also be because nobody can quite understand the complexities of one of the strangest and perhaps most dangerous military conflicts seen since World War II.

One of the best explanations we have seen of the Syrian conflict is offered by Simon Mabon, a lecturer in International Relations at Lancaster University. He writes for the Conversation website that efforts to bring a stop to the fighting have been next to impossible because an estimated 60 different “factions” are or have been involved in the conflict; and all seem to have different agendas.

Mabon notes that the troubles in Syria go back to the Arab Uprisings of 2011, when “regime-society relations became strained across the Middle East. When that happened Mabon noted that the “Middle East’s bigger players sensed an opportunity to extend their influence across the region by manipulating events in other countries.”

Among those big players have been Saudi Arabia and Iran, two countries that have been in competition for control of the Islamic world. Thus we have various terrorist groups, supported by Middle Eastern interests, challenging Bashar al-Assad, who has been an Iranian ally.

Iran is supporting Hezbollah, the Lebanese Party of God, which is fighting on behalf of the Assad government. Another military force known as Nusra, a wing of al-Qaeda and now affiliated with ISIS, is fighting against the Assad regime.

What is complicating the issue has been involvement of Turkey, Russia and the United States, all with what Madon describes as competing agendas.

Turkey wants to resolve the conflict so it doesn’t allow the Kurdish insurgents a chance to secede from Turkey and create a Kurdish state.

The Obama Administration, which declared war on ISIS, perceived Nusra as ISIS in disguise so was involved in attempting to drive ISIS out of Syria, Iraq and the Middle East. Thus U.S. forces were getting actively involved in the Syrian conflict.

Russia, on the other hand, is strongly supporting Assad and is busy assisting the Syrian Army and Hezbollah in fighting against Nusra. Russia’s interests are two-fold. Syria offers Russia ports that provide excellent access to the world oceans on the west. Syria also is a close neighbor to Russia.
Looking at this picture, one would think that the United States, Russia and the Assad government would all be in one accord; all fighting against the rebel force known as ISIS. But the situation is much more complicated than it appears.

As one observer posted: “Most of Nusra’s recruits are local Syrian men looking to join a well-armed faction that could take on Assad’s military.” Nusra fights alongside rebel forces, but it has an allegiance to Syria which “puts it at odds with ISIS, which is primarily a foreign movement of fighters and leaders from outside Syria.”

The Obama administration perceived Nusra as al-Qaeda. Consequently, the United States withdrew support for Syrian rebel forces challenging Assad. But some of  the drone strikes against Nusra killed both terrorists and innocent families. Thus the people felt that they also were being targeted by the United States.

In the meantime Russia is opposed to U.S. intervention in Syria. And probably for good reason.
There has been reports that ISIS has been a CIA-manufactured terrorist organization designed to infiltrate the entire Middle Eastern region. The CIA also has reportedly been supplying guns and ammunition to ISIS to assist in its clandestine activities.

If this report is true, then there is good reason why Putin and the Russian military are so opposed to U.S. involvement in Syria.

This also would explain why efforts by Vice-President Joe Biden and the United Nations to bring about a peace movement in Syria were next to impossible. The negotiators never wanted peace in Syria in the first place.

Now with President Donald Trump throwing his forces into the mix, it is difficult to perceive what is about to happen. The Assad forces are being blamed for the deadly gas attacks but is this a factual report? Very little information coming out of the White House these days is considered believable.

Syria remains one of the most complicated civil wars to ever have been created by human insanity. If we are not ultra careful in getting this power keg diffused, and quickly, there is an extreme danger here of an all-out world war. The worse thing U.S. voters could have done at this point in history was to have elected a buffoon like Trump, with no experience in diplomatic relations, to be the nation's president.