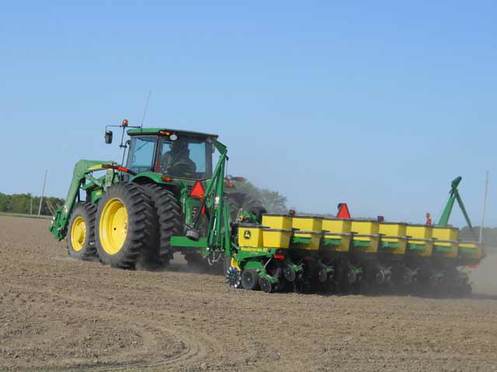 When I was a young lad living on a farm in rural Michigan, we had the Lange brothers as our neighbors. They were both first or second generation Germans who farmed the old fashioned way with horses, big double-plow tractors with steel wheels, and thrashing machines that harvested their grain.

The Langes rotated their crops because they knew it was good for the soil. They used the natural manure from their livestock for fertilizer. They were happy when their wheat crop yielded 30 bushels to an acre.

My father worked as a chemical engineer for the old Huron Milling Company in nearby Harbor Beach. The company produced wheat starch, food seasonings and other products from local farm produce. The plant also produced a dark smelly waste nick-named “sauce-cake” that nobody had any use for. Consequently the company maintained a vacant piece of land west of town where sauce-cake was dumped in giant piles. It stunk so bad nobody wanted to live anywhere near it.

Dad took sauce-cake on as a project. He discovered that it was high in nitrates so he reasoned that it might make a good fertilizer. He had a truck load of the stuff brought to the farm and spread it around on some of the land. When his wheat yield on that test strip jumped to 50 bushels to the acre, the Lange brothers and other farmers in the area decided they wanted sauce-cake trucked to their farms too.

Those were times of innocence. The farmers all knew that manure was a good fertilizer and that rotating crops was good for the farm. What they didn’t understand then was that the nitrate that plants need is used up by certain crops like corn and returned to the land through the manure of the livestock. It is a natural cycle. My father’s discovery of a new and more abundant source of nitrate was an unexpected boon for the old farmers of our Michigan neighborhood. By using it they found they made more money on every acre of grain they grew.

I went off to college and didn’t return to the farm for several years. When I did come back I was shocked at what was going on. My father was leasing his land to a neighbor who was breaking all the rules. He was growing corn on that land year after year, season after season. I asked about crop rotation and was told not to worry. New fertilizers were making a new way of mass farm production possible. Times were changing.

They had changed all right. During World War II researchers around the world learned how to mass produce ammonium nitrates for the manufacture of bombs. After the war the United States had ten large-scale nitrate factories operating. Naturally these plants shifted from munitions to its other big and natural outlet, farm fertilizer. As Monsanto began cranking up its new hybrid strains of corn and the world demand for corn grew, not only as cattle feed but alternative sources of fuel, the old family farms were disappearing.

The change began slowly at first. Neighbors began buying up adjoining farms, tearing down fence rows and putting larger fields to corn. The old farms of 40, 80 and 160 acres were disappearing. Farmers were now using huge John Deere monster tractors with air conditioned cabs that pulled 10 and 12-bottom plows. Aircraft were being used to fertilize and herbiside massive fields of grain, corn and beans. Giant barns were appearing to accomodate larger and larger numbers of cattle, chickens and other farm animals. Farmers were going off to Michigan State University to get college degrees in mass production of farm produce.

It was not long before the indistrial farms appeared. The clean farm air now reeked of cattle dung. Thousands of cows, pigs and hogs were now packed into feed lots, with farms all around producing feed corn. They built giant pits to handle the loads of livestock manure which was treated like city sewer systems before spread on the open fields. And farmers were using the new artificially produced ammonia nitrate to get more product out of every acre.

So where is all that ammonium nitrate coming from? We were shocked to learn that the Koch Brothers, good old Charles and David of contemporary political media fame, head a world conglomerate of companies that not only deal in oil, plastics, livestock and chemicals, but are among the major suppliers of ammonia nitrate.

Koch Fertilizer is now one of the world’s largest producers and marketers of fertilizers and the company boasts the capability to produce 13 million metric tons of fertilizer a year. Their conglomerate reports a yearly revenue of $115 billion with a hundred thousand employees from around the world.

The United States is today a major corn producer and consequently a massive user of nitrogen fertilizer. This industrial synthetic nitrogen has created a major assault on our environment that has not gone unnoticed, but its cause has been all but ignored.

The excess nitrogen from those giant fields of corn is seeping into our lakes and streams, into our rivers and eventually out to our oceans. This is creating massive algae blooms that remove oxygen and kills off fish and other sea creatures. The nitrates are poisoning our drinking water. Excess nitrogen fertilizer is blamed for the “dead zones” now appearing in the Gulf of Mexico, Chesapeake Bay, off the coasts of California and Oregon and hundreds of other places around the world.

The practice by industrial farms to dump billions of pounds of synthetic nitrogen fertilizer and treated sewage sludge on farmland has a very bad side effect. It is producing nitrous oxide pollution in our air. Nitrous oxide along with methane gas is said to be major factors along with carbon dioxide in causing global warming.

The excessive nitrates in drinking water are affecting people’s health. It is believed linked to cancer, brain damage and hormone imbalance.

It may be of interest to note that a study by researchers at Iowa State University in 2012 found that the Lange brothers were doing it right all along. By just turning to regular crop rotations, not planting corn in the same field year after year, and utilizing natural animal manures, Midwestern farmers could radically cut their reliance on artificial nitrogen and still maintain current levels of food production. A second study found that crop rotations also reduced nitrogen runoff.

The problem is that as long as people love their meat diet and want to drive their ethanol powered cars, corn is going to remain a major farm crop in the U.S. for some time.
​
Getting farm dependence on ammonia nitrate under control is feasible. Getting the Koch brothers under control is another problem altogether.