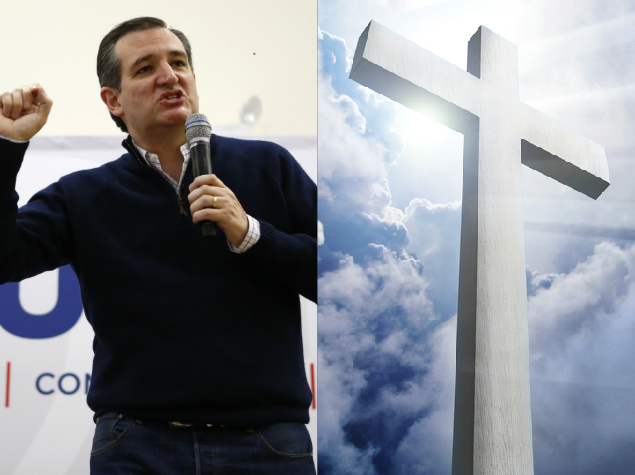 Why Ted Cruz Is So Dangerous

State Republican voters are coming dangerously close to posting Texas Senator Ted Cruz up for nomination as their candidate for the presidency. And if you are listening to what Cruz is preaching, this ought to scare the pants off of everybody.

In a recent speech in South Carolina Cruz told his audience: “Our nation is a Christian nation and when I’m president I’ll make sure of it, because the Bible will be the Constitution.”

He went on to say that our willingness to have a black president and allow same sex marriages is “un-American.” But he promised to “change all that” if he gets in office. “It’s what George Washington would want. In fact, it’s what Jesus would want.”

We are quite sure he was wrong on both counts.

The United States was not founded as a Christian nation. In fact, Thomas Jefferson, who drafted the Declaration of Independence, was not a Christian. He believed in a Creator but his concept of it was more like “Nature’s God,” or deism. He even went so far as to edit the gospels to produce the Jefferson Bible, which removed the miracles and mysticism of the Jesus story and established what he believed to be the correct moral philosophy of Jesus.
The First Amendment to the Constitution reads: “Congress shall make no law, respecting an establishment of religion, or prohibiting the free exercise thereof . . .”

The founders of this nation went out of their way to establish a wall between government and the church. They were well aware of the catastrophic history of European governments caught under the yoke of Roman Catholicism and later the Church of England. They wanted to assure that the settlers that came to North American colonies would have the freedom to worship the way they choose. The tyranny of the church was one of the reasons many Europeans gave up their homes and braved the high seas to start over in the new land.

In spite of their efforts at the launching of this new nation, Christian ideologies and philosophies crept into the laws over the years. This has been especially true in regard to laws prohibiting “immoral” sexual behavior. The church managed for years to have laws on state and federal books prohibiting homosexual behavior and even sex between unmarried men and women. The horrors of prohibition came about because of church-driven beliefs about alcoholism. The battle raging over marijuana and the insane “War on Drugs” also has been somewhat church driven and totally unnecessary.

If you want to imagine what a Cruz presidency, supported by a pack of illiterate Tea Party legislators might do to this nation, think of what Oklahoma Tea Party state house candidate Scott Esk is promising his supporters. Esk declares himself a Conservative Libertarian and says he believes in Old Testament law. Consequently he opposes abortions, women’s rights, homosexuality and says he believes the punishment for anyone who practices gay sex should be public stoning.

Esk and his ilk would give the nation its own unique brand of Sharia Law, the law of Islam which we are sure nobody really wants. It robs women of their rights, outlaws homosexuality and abortion, rejects science in favor of religious doctrine, removes separation between church and state, forces the teaching of religion and creationism in public schools, and in this case, would proclaim Christianity the official religion of the land.

Christianity is a wicked religious force in disguise. While the teachings of Jesus can be found in the New Testament. There we also find the sick letters of Paul, who was clearly out to destroy the ministry that Jesus proclaimed.
​
When you study his letters, it is clear that Paul hated women, and was possibly a homosexual in disguise. Jesus, on the other hand, conducted his ministry walking the land and living with a band of men. Also tagging along was Mary Magdeline, the prostitute.