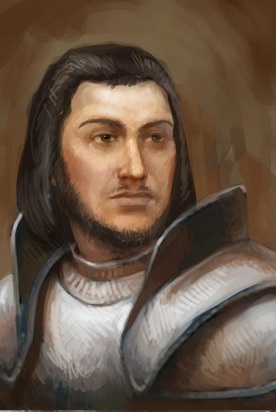 Born into wealth and nobility, Gilles de Rais fought alongside Joan of Arc in the infamous Hundred Years War. He married into wealth, foolishly spent himself into poverty, and was hung in 1440 after being convicted in the sexual torture, mutilation and killings of an estimated 200 French children. He was truly a man of many faces.

In his youth de Rais won the title of Baron de Rais, lord from Brittany, Anjou and Poitou. He was admitted to the French court after earning the favor of the Duke of Brittany. From 1427 to 1435 he served as commander of the Royal Army and later was appointed Marshal of France.

In spite of all of the honor and glory bestowed upon de Rais, the man was carefully hiding a hideous dark side. Between 1431 and 1440 it was believed he kidnapped, sodomized and murdered as many as 200 children.

While he wasn’t taking his pleasures with children, de Rais was busy disposing of his family’s wealth. In a peculiar contrast to his alleged ravaging of the children, de Rais spent himself into poverty building the Chapel of the Holy Innocents, a memorial to the children King Herod reportedly murdered in his quest to destroy the Baby Jesus (Matthew 2:16-18), and then staging an elaborate theatrical spectacle, Le Mistere du Siege d'Orleans.

Historians like to believe de Rais' insane behavior was linked to his personal guilt over what he was personally doing to the children. While the story of Herod's order to kill the newborn children of Bethlehem is found in that single book in the Bible, there is no historical record to back it up. Bible scholars consider the story folklore lacking foundation.

Yet the popularity of de Rais' campaign to erect this elaborate chapel swept Europe at about the time he lived. Many churches and chapels were dedicated to child saints.

While he was building his elaborate chapel, Gilles was accused in 1432 of a series of child murders. This came to light after a violent dispute with a clergyman led to an ecclesiastical investigation. To their horror, the church leaders found that de Rais was linked to possibly hundreds of murders and torturing of children. The parents of the missing children testified against him during his trial.

He was condemned to death and hanged at Nantes on October 26, 1440.
​
It is said that Gilles de Rais was the inspiration for the fairy tale "Bluebeard" written by Charles Perrault in 1697.