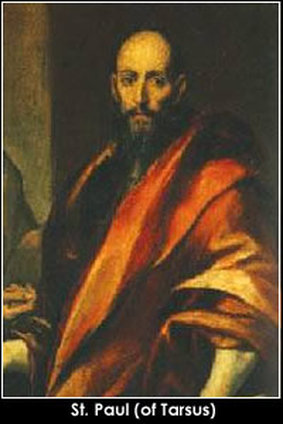 There is a terrible story linked to Paul of Tarsus that needs to be revealed. The controversial website One-Evil.com portrays Paul as a murderer, a false messiah and a Pharisee committed to establishing a cult designed to destroy the teachings of Jesus.

As a former Bible student we studied the details of this transcript of condemnation with great interest, carefully linking timelines with the events and the collaborating characters in what can only be described as a great conspiracy against humanity. While I am sure that the report I am about to lay out this date will stir many Bible thumpers to want to condemn my soul to Hell, I must say that the facts appear to speak for themselves.

The man we know as Paul of Tarsus, the man who allegedly devoted his life to creating and establishing Christianity throughout the Roman Empire following the death of Jesus, was not only a fraud, but he was the killer of both Stephen the Martyr and James the brother of Jesus. Paul also was involved in the mass killings of thousands, and can be described as the world’s first known “anti-Christ.”

This is a complex story that involves the so-called Apostle Luke, who collaborated with Paul in writing misleading cult theology; Linus, who was appointed by Paul to be the first Pope to rule over the so-called Pauline Church of Rome; and even Roman Emperor Nero who was blamed for a fire that was torched under orders from Paul which destroyed a large portion of the City of Rome.

It seems that Paul, whose real name was probably Nethanel or Dositheus, was the son to a wealthy Jewish Sarmatian High Priest line living in exile in Tarsus, the old name for Turkey. That explains why he was always identified as Paul of Tarsus.

Like all world religions, the Jews were divided into a variety of different sects with hard-line teachings that separated them from one another. The Sarmatians were such a group. They considered Mount Gerizim, a mountain on the West Bank to be the real location chosen by God, or Yahweh, for building a holy temple. The temple was erected when Alexander the Great was in power.

The main line of Jewish believers put their temple on Temple Mount at Jerusalem. They considered the Gerizim Samaritans a false religion. Thus there was a bitter schism existing between the Jews and the Samaritans. According to text by both the historian Josephus and the Talmud, the tension led to the destruction of the Samaritan temple in about the Second Century before Christ.

Nethanel, who gave himself the name of Saul, was a Samaritan who joined the Pharisee movement, which Jesus condemned. The Sarmatians believed that a messiah would be coming to rebuild their temple on Gerizim and restore their place as the spiritual leaders of the Israelites.

Saul began to claim that he was the foretold messiah. And there is strong historical evidence to believe that his personal ministry was going on at the same time Jesus was teaching his Gnostic doctrine.
​
Since he and Jesus were both full Roman citizens, the Roman and Jewish authorities were powerless to stop Jesus and Saul from preaching their doctrines. But in the year 36, both men were arrested and brought before Pontius Pilate. At that time Paul (Saul) was known in the historical record as Barabbus. And anybody who knows the Christian Easter story knows how Pilate let the crowd choose between Jesus and Barabbus for judgment. It was a strange choosing between two “messiahs.”

Jesus was allegedly executed and Barabbus (Paul/Saul) was sent into exile in Damascus.

The record shows that in about the year 43, the High Priest Ananias traveled to Damascus to ask Paul to help in the elimination of the Nazarene Sect of followers of Jesus. Paul agreed, changed his name back to Saul, and began his crusade against the followers of the teachings of Jesus.

Paul established a counter cult that became known as Paulinism. He incorporated the aide of Josephus ben Matthias (the so-called Apostle Luke) and other members of the House of Ananus to establish Boethusianism, an early name for Paulinism. They wrote much of the text and letters that are believed to have found their way into the New Testament.

The sole purpose of Paul’s activities was to render the teachings of Jesus and the Nazarenes ineffective by producing a counter religion claiming to be the only true faith. They set about destroying all texts and references to Gnosticism as taught by Jesus, and killed or attempted to kill all of the disciples and members of the family of Jesus.

As Saul he founded and wrote the synoptic gospels and then traveled around the ancient world with his son, Joseph, who was known by the name Barnabus, establishing churches. It was said they traveled as far north as the British Isles where they sold their cult to Queen Boudica. She declared her people to be among the first Paulinians.

The historical record shows there was a Queen Boudica who ruled over a British Iceni tribe and actually led an uprising against the Roman Empire. When she died in the year 60 or 61, her “kingdom” fell back into Roman hands.

The Catholic Encyclopedia names Linus as the first pope after Paul. Evil-One.org claims that Paul selected Linus, a native of Britain, to fill his seat as leader of the cult in Rome while he and Barnabus were traveling around, establishing their false doctrines.

It is believed that Saul was directly involved in the public condemnation of the ministry of the Apostle Steven and the decision to stone Steven to death. This was because Steven was teaching the same message that Jesus taught and Saul needed to stop him.

In the year 62, Saul was allegedly among the “scribes and Pharisees” that gathered to condemn the Apostle James for his teachings. They ganged up on James and ordered him to quit his ministry. When James refused, they began to stone him in the street. When Jeremiah the prophet cried out in his defense, the stoning stopped. At that point an ancient text reads: “then one among them, one of the fullers, took the staff from which he was accustomed to wring out the garments he dyed, and hurled it at the head of the just man.” And thus was James murdered in the street.

The O'Collins text claims that the killer in that crowd was Saul. It reads: “After the public murder of the blood brother of Jesus, James the Just, Saul was arrested and taken to Rome. After deliberately calling for the burning of Rome, he was found guilty for his crimes and executed.”

The story claims that it was Pope Linus who sent a gang of thugs out to set the fires that partly destroyed Rome. Paul ordered Linus to burn the city to the ground. “If not for the skill and brilliance of Emperor Nero, he might have achieved his aim,” O'Collins wrote.

Nero was blamed for the fires but there is historical evidence to show that he was innocent of any involvement. He was not even in Rome when the fires broke out, and the fire destroyed part of an elaborate building where Nero lived.

The horror of the story was that an estimated 250,000 people died in the fire that swept Rome that terrible day.

Both Paul and Pope Linus were allegedly executed for their crimes in the Circus Maximus. Nero rightly blamed the Paulinists for the fire and he subsequently ordered the infamous persecutions of the followers of the cult. The Catholic records identify this as the period of severe persecution of the Christians by the Romans.

Even though Paul was executed, the cult he, Linus and Luke founded lived on. It took another 200 years before Paulinism became known as Christianity.

The Catholic Encyclopedia claims a regular succession of Popes following Linus although O'Collins claims that the next man to sit in the Pope’s seat in Rome was Victor I in the year 193. And there was nothing very holy about him either.
​
And this appears to be the real story behind the origins of the religious cult of Christianity.