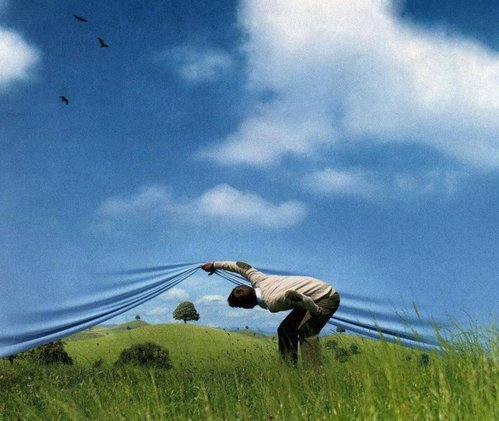 The Human Perception of Reality

In the third book of his Cosmic Trigger trilogy, the late author Robert Anton Wilson takes a unique look at the concept of human conditioned "tunnel reality" by bringing his readers into a dark room filled with people looking at a television screen.

It is such a brilliant way of explaining the way we are brainwashed by society to view our world, I am going to take the liberty this week of passing it on to you. Begging Mr. Wilson's indulgence, I am adding a bit of paraphrasing and personal interpretation, for clarification, since people who don't read Wilson might have a difficult time understanding his point. In doing this, I suspect that I also am adding a little of my own seasoning to the soup, which may be unavoidable. I like Wilson's declaration in each of his books that he doesn't believe in anything. I think he is closer to the truth than most other living humans. While I would like to make a similar declaration, I am probably not there yet. I am open to new ideas, but I tend to favor certain precepts over standard dogma.

In Wilson's story, the people in the dark room regard what they view on their television screen as the real universe. The characters watch a daily kaleidoscope of images, ideas and impressions as they are delivered via that television set. They see and hear political campaigns, news presentations, evangelistic preaching, situation comedies, soap operas, dramas and even go on educational tours of the planet. As they grow older, the people in this room find themselves joining various groups that agree with certain belief systems, political parties, and minority groups. They even go so far as to argue among themselves as to whether the electric cord that supplies life to the television set is a link with God.

The plot thickens when one member of the group named Anna happens, by chance, to look into the darkness on the other side of the room and notice a door. Out of curiosity, Anna walks to the door, and opens it for a brief moment. On the other side is a lighted room filled with larger-than-life people. Because the light in the second room is so bright, she is almost blinded by the vision.

Anna is shocked by what has just happened. She has had an out-of-television (OOT) experience. She is fascinated by it, but at the same time, afraid to mention it to her friends because she is sure they will think she either made up the story, or has lost her mind. So she remains quiet. Curiosity eventually draws her back to the door, however. This time, rather than take a peek, she walks through it, and joins the people on the other side. She finds herself in a production studio, among the very people she has been watching all of her life on the small television screen. She watches as the people act their parts, then take breaks between scenes to enjoy a cup of coffee or have a cigarette. She is surprised when someone appears to be killed in a gunfight but then gets up and walks away. Anna is very confused by this experience.

The following day, back in the dark room with her friends, Anna watches a television presentation of the same play she watched being created on the lighted side of the door. It is as if she has had a premonition of events to come. This time, however, Anna notices that there are no breaks between lines. Nobody takes time out for coffee or a cigarette between events. When the actor is shot and killed, he appears to remain dead. She recognizes that something is wrong with the so-called reality she thought she knew, but Anna still is afraid to talk to anybody else about it. Yet she continues to be drawn through the door for more and more OOTs.

One day, Anna notices that someone else in the group also is slipping through the door and getting a glimpse of the world on the other side. When this person returns, Anna speaks quietly about her experience. The two members of the group now share an opinion, that there is an expanded part of their universe and they are just beginning to discover it. Within a short time, others join them. And now there is a group within the group that secretly believes in a parallel universe. They seek various ways of achieving out-of-television experiences. To achieve it, the attempt meditation, mind-altering drugs, and yoga. Each time they enter the lighted room more and more information is acquired. The group is keenly aware that there is something more to the universe they are in, but they find they are banned from speaking of it. Society in the dark room prefers to remain locked within the social dogmas they grew up with. Anyone who challenges this is considered an outcast.

Wilson draws a parallel with the vision Anna and her friends are having. He notes that they go no farther than the television camera studio just outside their television room. They recognize an expanded universe, but never discover the world that exists beyond the fabricated confines of either the television studio, or the false drama presented on the screen in the dark room.

He compares this experience with that of an ant, climbing out of its hole in the ground, and getting a sudden and unexpected concept of the back yard. Although what it envisions is massive and all encompassing, the creature fails to grasp the concept of the house that requires the back yard, or the entire city around the yard, also filled with houses, and all of them having back yards with more ant hills in them.

Thus it is with us. Our carefully prescribed concept of the universe is so limited in its scope, we lack the mental capability of understanding the reality that lies beyond the back yard. Some of us, with the help of psychic or right brain functioning, or possibly a psychedelic drug (now declared illegal), snatch brief glimpses of something more, but we lack the ability to perceive much beyond our own dark three dimensional world. That fourth, fifth, sixth, seventh, eighth, ninth, tenth and perhaps even more dimensions exist in the cosmos is beyond our ability to grasp. What is worse, most people are unwilling to even try.