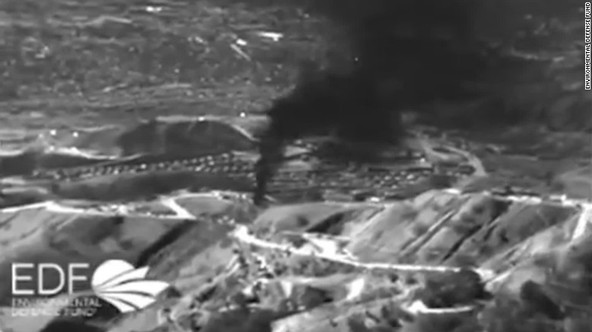 Why The L.A. Methane Leak Matters

A leak that developed on Oct. 23 at the base of a methane gas well in Aliso Canyon, Southern California, has been declared one of the biggest natural disasters in U. S. history. California Governor Jerry Brown has declared the leak a state of emergency, and workers for Southern California Gas Company, which owns the well, have been trying unsuccessfully to plug it.

To people living in the immediate area the leak is troublesome, but there isn't a broad sense here of alarm. The leak isn’t making big headlines because the gas is invisible, it is spewing out into the atmosphere and it smells like rotten eggs to anyone getting a whiff. Residents of about 1,700 homes have been temporarily evacuated until the problem gets resolved. Some people are suffering from nose bleeds, headaches and nausea.
That is the visible stuff.

What is invisible is that the leak is spewing a startling 110,000 pounds of methane gas every hour. Methane is not only highly toxic but it is highly flammable. And it has an immediate global warming potential of 120 times that of carbon dioxide. The rotten egg smell is a clue that the gas also is mixed with hydrogen sulfide, another highly toxic, flammable and dangerous gas to have in the atmosphere.

This methane is added to a rising amount of methane that is now escaping from the Arctic and Antarctic regions, where melting ice is releasing troublesome levels of stored gas into the world’s atmosphere daily.

Before the California leak occurred environmental researchers at Columbia University were measuring a daily release of methane at 1,950 parts per billion, which they warned is way over the established “livable level” of 1,250 parts per billion per day.

As the planet warms and more and more ice melts, the methane levels are expected to continue to climb dramatically. With the high volume of methane escaping from the California well added in, the effect on global warming is expected to escalate at alarming rates.

A report in Arctic Times states that methane has a global warming potential of 120 times that of carbon dioxide. And 20 picograms of methane has the greenhouse effect of 2,400 picograms of carbon dioxide.
​
While Governor Brown’s emergency declaration was accompanied by an order for Southern California Gas Co. to take immediate steps to plug the well, a company spokesperson says it is not going to be an easy task. Company workers have been trying desperately to do just that but as of right now nobody knows just how to deal with this leak.

That is because it is located at the base of the well, some 8,000 feet deep in the earth. The force of the leaking gas is so strong that standard methods of stopping gas leaks, which involves pumping fluids directly into the well, does not stop it. Workers are now drilling a relief well beside the ruptured well in an effort to remove some of the pressure. It it works, they believe the leak can be stopped by late February or sometime in March.

The growing release of methane from melting ice and from vast pockets of trapped gas below the ocean floor has been alarming researchers in recent years. Yet scientists and the media have been staying relatively silent about what they see as a looming catastrophe.

Dorsi Lynn Diaz, in a report for Examiner, recently wrote: “At this point, and the critical state we are in, I think they know we are in such a major crisis that they really can’t make this headline news. They are dancing around the subject trying to figure out what to do and how to proceed with a situation that is blowing all their projections out of the water.”

Diaz wrote that the issue is “so huge, so frightening and so mind boggling that if people were to wrap their minds around this there would be a mass uprising and mass panic.”

So how will all of this additional methane affect our world and our lives? A report in Above Top Secret noted: "The seas, lakes and oceans are now pluming deadly hydrogen sulfide and suffocating methane. Hydrogen sulfide is a highly toxic water-soluble heavier-than-air gas and will accumulate in low-lying areas. Methane is slightly more buoyant than normal air so it will tend to contaminate our atmosphere from the top down.

"These gases are sickening and killing oxygen-using life all around the world as our atmosphere is increasingly poisoned. Because both gases are highly flammable and because our entire civilization is built around fire and flammable fuels, this is leading to more fires and explosions."
​
The writer suggested in a series of articles that the increased mixture of methane in the air may be the cause of the unexplained "booms," large balls of lights and unexplained explosions occurring in the sky at various places around the world.