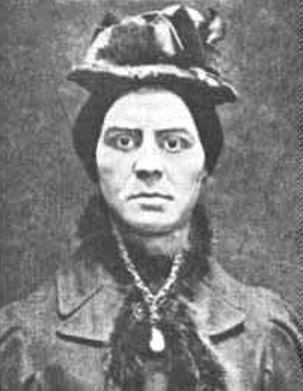 She was only found guilty of a single murder, but the way Kate Webster killed her victim and what she did afterwards has gone down as one of the most gruesome crimes in the history of London.

The victim was Julie Martha Thomas, an eccentric widow who lived alone in a small cottage just outside of London. People who knew her said Julie had a severe temper and consequently was unable to keep a housekeeper hired for very long.

Her last housekeeper was Kate Webster, an Irish woman who apparently came to England to escape her reputation as a thief and pickpocket. Webster had been sentenced to a 15-year prison term when she was only 15. She was a heavy drinker who often got into fights with bar patrons.

The year was 1879 and Thomas hired Webster as her new housekeeper. Neither woman knew the reputation of the other, which was a formula for trouble.

After months of constant fighting and quarreling, Julie decided to fire Kate. But when she ordered her to leave the house a quarrel ensued and Webster pushed Julie down a flight of stairs. The fall didn’t kill Julie, but before she could get up and yell for help, Kate pounced on top of her and strangled her to death.

Here is where the story gets dark.

Webster next used a saw and razor to dismember the body. Next she boiled it and stuffed the pieces in a wooden box. Everything fit except Julia’s head and one of her feet.

Kate spent days cleaning up the bloody mess. One finished, she cleaned up, got into one of Julia’s dresses, stuffed the woman’s dismembered head in a black bag, and went out on the town. She took the bag with her into a local pub where she celebrated with drinks with the other bar patrons.

Eventually, Kate persuaded a neighbor to help her carry the sealed wooden box with its morbid remains to a bridge on the Thames. The man who helped her later told police he heard a splash after he left the scene but apparently decided he did not want to know what was in the box.

The body was discovered floating down the river the next day. Without a head, police had a problem identifying the remains. They didn’t have fingerprint or dental records to work with in 1879.

For the next several weeks, Kate lived in Julia’s cottage, slept in her bed, wore her clothes and jewelry, and lived off the money she made selling the things in the house. In due time she sold all of the furniture, the house and even the gold fillings from Julia’s teeth.

They said Kate even attempted to sell the fat rendered from boiling Julia’s body to a local restaurant. The restaurant wouldn’t buy the fat, so Kate fed it to some young boys who they said ate bowls of it.

Eventually neighbors and people who knew Julia discovered her disappearance and police began an investigation. Kate fled back to Ireland but authorities caught up with her and brought her back to London.

A jury convicted Kate of murder and she was hung. Before the hanging she     confessed her deeds to a local priest. But she would not disclose what she did with Julia’s head.
​
A human skull, believed to be that of Julia, was discovered by BBC naturalist David Attenborough while he was excavating his yard in 2010. It had been buried where Julia’s cottage stood over a century earlier.