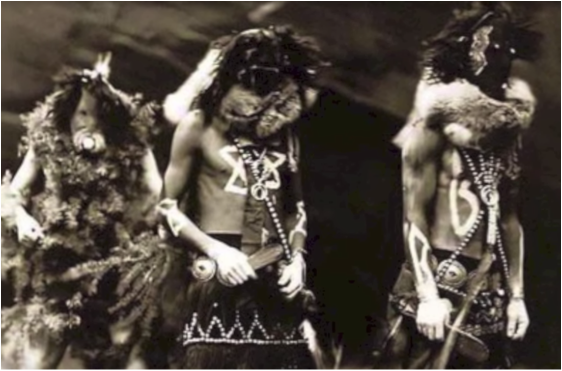 By definition, a skinwalker is a scientific impossibility. It is a human that has allegedly achieved an ability to change shape at will and become a wild animal or bird, or at least give others the impression he or she can do this.

I first heard of skinwalkers when I met a man who claimed to be one. He was a drifter who told about spending time in prison for violating federal laws in a quest to protect wolves from being hunted into extinction in the southwest. He said he escaped the monotony of prison by turning himself into a bird and flying free. He never proved his ability when I was with him, however, and wolves were virtually non-existent in that part of the country at the time he was supposed to have been protecting them. I marked the story down as just another western tall tale.

It was when my wife and I lived for a winter with a Navajo medicine man and his wife that the concept of a skinwalker moved into a new realm of understanding.

The native Americans live in a completely different world from anything that we know and understand. They have a lot of customs that have deep spiritual roots, usually with the Mother Earth, and they are deeply embedded in the arts of black magic and witchcraft.

There were numerous unexplained events that went on during our stay both on the reservation, and even afterward, that defied logic. I recall one night in Sedona when awakened in the night by the sounds of howling wolves at our door. It was common knowledge at the time that where no surviving wolves in Arizona, yet I was hearing what sounded like a pack of them right at our door. It was a strange feeling, to be standing at the door and fearful of opening it and looking upon what might really be on the other side. And why wasn't my wife, usually a light sleeper and always sensitive of strange sounds in the night, also hearing this?

I noticed also that a strange light was coming from a coffee table in our living room. I looked again and saw that a large crystal that we had placed on display there, was aglow. I thought at first that it was a reflection, perhaps of moonlight, on the stone. But when examining the crystal I saw that it was not a reflection. The crystal was really glowing.
Suddenly the chorus of wolfen howls seized. And when it did, the light in the crystal began to dim and eventually go dark. At last I mustered to courage to swing open the door and look on our yard. There was nothing to be seen.

On yet another occasion, while living on the reservation, the dogs at the house began barking and carrying on as if something was really scaring them. Our hosts were away on one of their many trips so my wife and I were alone in the house. I grabbed my rifle, which I kept loaded by my bedside, and went to the door.

At first there appeared that nothing was to be seen. And yet, as I gazed into the darkness of the star and moonlit night, something was there. It was a large blackness....a complete absence of light that stood in the middle of the road right in front of the house. Once I became aware of it . . . and its immense size . . . it was quite frightening indeed. The thing was larger than a house and it just stood there, absorbing all of the light. You could clearly see all around it, but not through it.

I fired the rifle into the air at first, hoping to make it move away. Then I fired right into it. Neither shot caused any effect. I stood staring at it for probably an hour or more before giving up and going back to my bed. It seemed to be doing us no harm, and I thought it probably would just go away. In the morning it appeared to be gone. There was no trace of anything unusual, the dogs were content, and all was back to normal.

The skinwalker, when she appeared, was a surprise. She arrived first in the form of a frail, little-old-woman, the grandmother of the woman with whom we lived. By the time she arrived for a visit, we were well aware that these woman were part of a group of women in the neighborhood who belonged to an active coven of black witches. We also were finding hex charms and other signs of their activities at our doors and windows. We even found a stone with a strange inscription on it under the seat of our car.

Thinking back on it, I think it first began as a game with the ladies, perhaps to frighten us. But when we discovered their tricks and began repelling the energies, and sometimes sending the force of the hex back to its source, the tricks turned into more serious cursing. Perhaps it frightened them that we were not fearful of their magic and were actually learning how to fight back.

One day a wolf came to our door. Like before, we were alone at the house. There was a hard wind blowing and we were in the midst of a dust storm. The dogs were barking as if to ward off something sinister. My wife saw the wolf and called me to look out the kitchen window. By the time I got there it was gone.

We ran outside and found the wolf track in the sand. We followed it around the hogan to an older building behind it that was long locked and probably filled with things we were not supposed to know about. The wolf track came to an abrupt end, and turned into the small footprint of a human. A woman in flat moccosins. From there the footprints went directly into the side of the building. It was obvious that who or whatever was in the yard had passed directly through that wooden wall and was now hiding inside that locked structure.

The blowing sand was quickly covering up the tracks. I ran inside the house to get our camera so we could capture proof of our story. Without pictures we knew nobody would believe us. The images I got were faint and failed to show up on film.
​
All I can say is that we know what we saw and experienced in that strange land, during the winter we spent on the Navajo Reservation. And we are quite sure that we were visited by a real skinwalker.