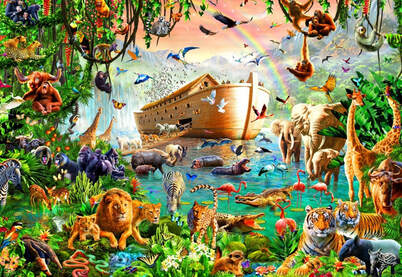 The Search For Noah’s Ark

It seems there is always a new expedition getting organized to climb Mount Ararat in Eastern Turkey because some aerial or satellite surveillance photograph has caught an image of a ship in the ice.

The purpose of these climbs . . . and there have been many . . . has been to prove an ancient Biblical myth that a man named Noah and his family built a wooden ship that carried them and a horde of world animals through a destructive world-wide flood that lasted 40 days and 40 nights.

There have many claims that remnants of the ark were found, but then lost again in the ever shifting ice and snow atop the mountain where the Genesis account claims the ark came to rest.

The latest expedition, conducted by Noah's Ark Ministries International in 2010, reported finding a wood structure that carbon dating suggested it was 4,800 years old. Proof that it was the remains of the fabled ark, however, could not be made.

Over the years a lot of explorations have been made in the non-ending search for the ark. One recent expedition spent $900,000 in its search, all based on a suspicious dark patch caught in a satellite photograph of the ice on Mount Ararat.

The Christian world badly needs a miracle, like proving the existence of an ark on Mount Arafat, to bring a halt to a looming landslide of interested membership that threatens its own future.

Unfortunately, all any research team can expect to prove if it finds remains of a ship on the mountain is that a world flood happened, and that a number of humans may have used the vessel in an attempt to escape.

Chances are, however, that if they used a wooden man-made ship, they didn’t survive. If the flood was caused in the way the latest theorists are saying, it involved a collapse of a vapor canopy that dramatically changed the world forever. It would have caused world flooding and brought extreme upheavals, plate movements, volcanism and other disasters that would have caused mass extinction.

And any biologist or geneticist can tell you that it takes more than the genes of a single family of both man and beast to carry the genetic diversity necessary to continue the species once the ship has landed on dry ground. Thus Noah, his wife, and their three sons and the son’s wives, were not enough to keep the human race going. It would take an estimated 150,000 humans with different genetic origins to do that.

The same biology would apply for all the animals. And speaking of biology, how could one family successfully traverse the entire world, gathering every species of animal, insect, invertabrate and spider in existence and herd them all into a single ship. And once there, what would they eat if not each other?

The Christians will argue that God can work miracles and that he manipulated the seeds of these few humans.

But the whole flood story appears to be a myth built upon what may have been a more localized event and that the human race and the stock of the many animals that cohabitated on the planet at that time was never in jeapordy.

If a flood of that magnitude really happened, it would have taken hundreds, if not thousands of years for the Earth to settle down again after the disaster caused by the canopy collapse. There was no way for a small family and all those animals to exist for that long on a 600-foot-long floating wooden craft.