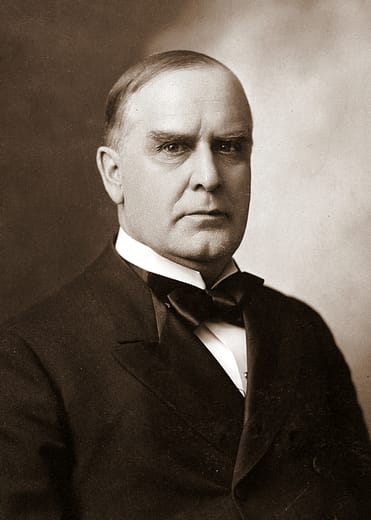 It was said that President William McKinley was reluctant to get involved when the Cuban and Philippine people were fighting for independence against the Spanish government. But he was in office back in the days of Yellow Journalism, when powerful newspapers owned by William Randolph Hearst and Joseph Pulitzer dramatized and exaggerated events occurring in Cuba, thus inflaming public opinion.

After the Battleship Maine mysteriously exploded and sank, taking 266 sailors to the bottom with it, there was a strong call for the United States to get involved in the war.

While McKinley favored attempts to negotiate a peaceful settlement with Spain, he was feeling a great deal of pressure from the media, the public and Congress to go to war. After an investigation determined that the Maine was sunk by an underwater explosive device, and after Spain refused to budge at the bargaining table, Congress voted to go to war. Thus it was that McKinley reluctantly became a war president.

It was a brief war that began early in 1898 and concluded with the Treaty of Paris on February 4, 1899. That treaty awarded the archipelago island states of Puerto Rico, Guam and the Philippines to the United States and Spain gave up its claims to Cuba. The deal also involved a payment of $20 million from the United States to Spain.

That is how the islands in the Caribbean became territory of the United States.

But there was a problem. Most American history books don’t bother to mention much about it. But the people of the Philippine Islands had been battling with Spain for their independence too. They welcomed the U.S. involvement in their war and once it was settled, expected to be given their independence just as Cuba was.

This did not happen.

For some reason McKinley sent American forces into the Philippines to lay claim to this new U.S. territory. There they came face-to-face with the Filipino nationalists and their leader, Emilio Aguinaldo. Thus began a fierce three-year-long war that eventually was won by the Americans. But the war caused the death of an estimated 20,000 Filipino combatants, another 200,000 civilians, and over 4,200 American troops.

That war was known as the American-Philippine War. Look it up in your history books. You may have a hard time finding much about it.

McKinley was re-elected by popular vote to a second term in office in 1890, with Teddy Roosevelt as his running mate. McKinley was assassinated in Buffalo by Leon Czolgosz, a Detroit mill worker, on September 5.

It is a strange twist in American history that nobody knows the name of McKinley’s killer, yet we can all rattle off the names of the killers of Lincoln and Kennedy. Perhaps the name Czolgosz was just too hard for folks to pronounce, or remember how to spell.

With two wars to his credit, and over 225,000 deaths from the Philippine-American conflict alone, President McKinley goes down in the record books as one of the world’s deadliest leaders. He did not choose to be a killer but it appears he was driven into doing what he did by the American media, public opinion, and the politics of the day. Perhaps we all have a little blood on our hands over this ugly issue.