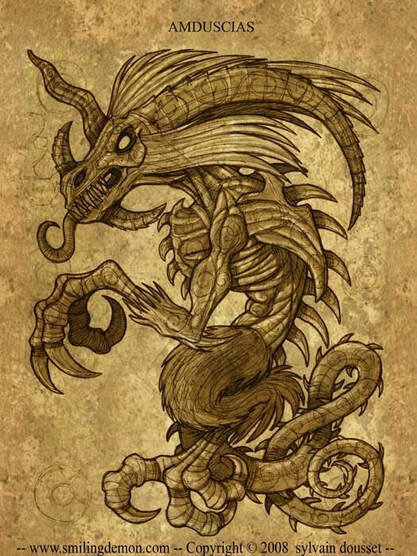 The source of the old fable about unicorns, or one-horned horses, may have been discovered in the evocation of the Goetia Spirit Amdusias.

This spirit appeared as a holographic projection of a horned horse. Not only this, but he arrived amidst the sound of blaring horns and there were bright colored lights flashing around him.

The evocation was described as follows: “Three bright orange lights appear above projecting an image of what seems to be a mythical creature known as a unicorn. The tone is received in the form of what sounds like music or an organized pattern of musical notes. Blue and red grids of light appear above and below the image of Amdusias."

Goetia historian Collin de Plancy wrote: "His true form is as a unicorn, but appears as human form when summoned. He will give concerts if commanded, and is accompanied by the sound of trumpets and other musical instruments."

Sixteenth Century magician Johann Wier described Amduscias as a duke in command of 29 legions of demons. Wier said this spirit is surrounded by music and can bring forth all musical instruments. He also has the peculiar ability to cause trees to bend.

This is the sixty-seventh spirit in the Goetia list.