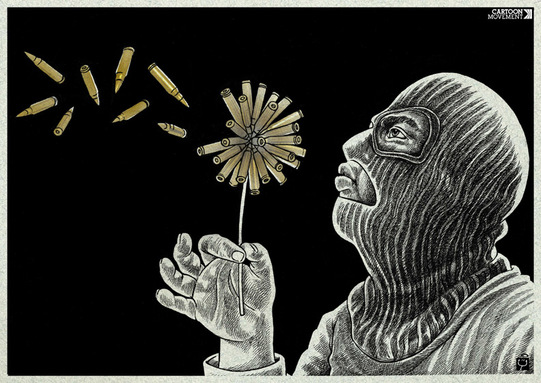 Jehovah God: The Master Of Terror

Since the 9-11 attacks Americans have been conditioned to think of bearded Muslims as terrorists. Objective students of history know, however, that terrorism is an international issue and nobody does it quite as well as the Christians.

While we haven’t taken the time to count them, one article states that the Bible describes 1,321 incidents of cruel or violent acts, while the Quran lists 532. Both books appear to support a God of vengeance that has no problem slaughtering the wicked characters among us.

The problem is, how do we define what is wicked in the eyes of the Lord as compared to our own personal definition of wrongdoing in the neighborhood? Some of the Bible scenes involving the mass slaying of entire communities become difficult for us to understand when we look at the full context of what went on.

Terrorism is defined as the premeditated, deliberate, systematic murder, mayhem, and threatening of the innocent to create fear and intimidation. It is usually done to create a political or tactical advantage over the targeted victims.

It is a tool of warfare that has been carried out effectively for centuries, despite the sophistication of military weaponry in existence. For example, the United States probably has the most advanced armada of weaponry ever to exist in the history of the world, but the people still respond with great fear to the mere threat of a terrorist attack by a maniac with a bomb strapped to his chest.

Seattle writer and psychologist Valerie Tarico offers an interesting review of the forms of terrorism found in the Old Testament books of the Bible. She lists the great flood, the destruction of Sodom and Gomorrah and 12 plagues of Egypt among the most violent of the killings. She notes that the Bible describes 158 different times when God brings deadly destruction down on humanity.

Sometimes the death sentence doesn’t make much sense. For example Tarico reminds us that when King David conducted a forbidden census, God’s sentence was a plague that killed 70,000 Israelites who did nothing “but let themselves be counted (1 Chronicles 21:1:17).
​
Ethnic cleansing also appears to be condoned by God. The Old Testament stories graphically describe military campaigns commanded by God that left entire villages destroyed, and all of the men, women and children dead They were slaughtered simply because they were not born as Jews and they were living on land awarded to the invading Hebrews returning to the Middle Eastern territories from Egypt.

In Numbers 31 the “Chosen People” were commanded to slaughter every man, woman and child among the Midianites, except for the virgin girls who were to be used as sex slaves. The verses also give explicit instructions for just what was to be done to these girls. It is strange how both the Bible and the Quran, books that were written by men during a period when males dominated kingdoms, that women were considered property. Enslaving and impregnating women of a conquered tribe was part of the ritual of victory in battle, and condoned by the holy written word.

Tarico notes that “even Jesus threatens violence and torment against those who don’t tall in line.” She quotes Luke 14:22-30 in which Jesus warns that those who fail to repent will be case into outer darkness where there will be “weeping and gnashing of teeth.”
She writes: “From Genesis to Revelation, God terrorizes those who fail to fall at his feet and worship in the way he demands. His followers inflict divinely sanctioned torture and death, knowing that if they don’t they may end up on the receiving end – or at least with less real estate and booty.”

Deuteronomy 2:25 is one of many verses that explain that God’s reign of terror on the land is designed to inflict a constant state of fear among the people, thus forcing them to obey His will. It reads: “This day will I begin to put the dread of thee and the fear of thee upon the nations that are under the whole heaven, who shall hear report of thee, and shall tremble, and be in anguish because of thee.”

Yup, that sure describes a God of love. With stories like that hanging over their heads it is small wonder that the world lives in constant fear of someday dying and standing before the Creator to be judged. If they can be condemned for just being in the wrong place at the wrong time, how can they ever be assured of avoiding an eternity in Hell?

While we are quick to condemn followers of the Quran for their terrorist acts, we seem to turn a blind eye to the evil acts Christians have inflicted on the world over the years under the direction of their own “Terrorist-In-Chief” allegedly hanging in the clouds over their heads.
​
It is due time for us to throw away those religious books, turn away from those ancient religious beliefs, and do what we all know in our heart is the right thing; learn to love one another and stop doing war against our neighbors.