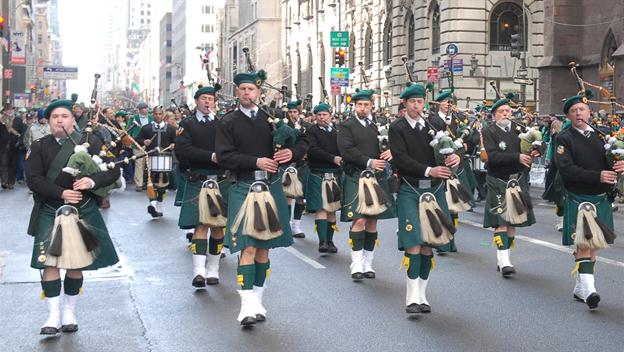 Who Was Saint Patrick?

Today is St. Patrick’s Day all over the world. People in the United States, Japan, Argentina, Russia, Great Britain and Malaysia are among the folks who are joining the Irish in celebrating the holiday by wearing green, tipping green ale, holding parades and telling Irish jokes.

So who was Saint Patrick, and how did the day become such an international time of celebration?

Little is really known about St. Patrick. Most school children will say the man was known for driving the snakes out of Ireland, but that is a strange tale. Ireland, which is a large body of land surrounded by water, has never had snakes.

All that is known about the man was that he was born in Scotland in the year 387, was the son of a Roman family, and at the age of 16 was kidnapped by Irish marauders who sold him into slavery to a Celtic chieftain named Milchu in the County of Antrim, Ireland.

In Patrick’s own writings, known as the Confessio, we learn that Milchu was a high priest among the druids. Thus Patrick learned the Celtic and Druid beliefs. He eventually escaped his captivity, made his way to St. Martin’s monastery at Tours, and studied Catholicism under St. Germain at Auxerre. After entering the priesthood, St. Germain sent Patrick back into Ireland to win the “heathen” Celts into Christianity. He died on March 17, 493.

While credited with bringing Catholicism to Ireland and remembered for leading many people to the faith, Patrick was not declared a saint by the Vatican until 1631. After that time the Irish began holding a religious feast day celebrating the day of St. Patrick’s death.

Strangely, not all of the Irish are ripe with praise for the ministry of St. Patrick. That country has been severely divided between the Roman Catholics and the Protestants. Yet for some strange reason, the celebration of St. Patrick’s Day has grown into a world-wide event. For most it appears to be more of a rite of spring than a remembrance of the missionary work of a Catholic priest.

The celebration didn’t really get recognized as a major event until after the Irish began migrating in large numbers to the United States. It was there that parades, the introduction of the shamrock and green beer, and all of the other frivolous activities associated with the day were introduced.

Some writers suggest that St. Patrick’s Day gave the Irish a special day of national pride. Many Irish people came to the Americas by selling themselves into servitude. That means they worked in slavery for a certain length of time to pay the cost of their boat trip across the Atlantic. Consequently, many of the great buildings, bridges, railroad lines and highways across the nation were completed by the sweat of the Irish.

The recognition of St. Patrick's Day in the United States has little if anything to do with religion.
​
This is clearly evident in the fact that people of all ethnic, religious and political backgrounds all over the world join with the Irish in tipping one for St. Patrick on March 17.