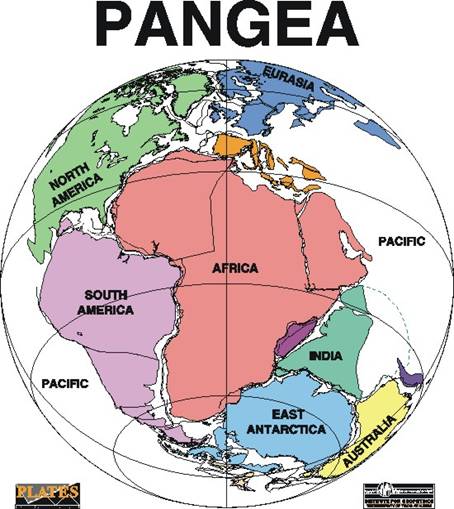 The Days Of Peleg

Peleg, a fifth generation descendant of Noah, is briefly mentioned in the tenth chapter of the Book of Genesis:

“And unto Eber were born two sons: the name of one was Peleg; for in his days was the earth divided; and his brother’s name was Joktan.”

And therein we have a mystery. There is no explanation of the dividing of the Earth, or why Peleg’s name should be uniquely associated with it. If Peleg and Joktan were brothers, why wasn’t the Earth divided in their days?

This vexing little question has rippled through my mind ever since I did an extensive study in Genesis some years ago. Obviously the same question has crossed the minds of a few theologians and even an occasional geologist.

That is because there is a theory, based mostly upon new and intricate maps of the ocean bottoms and shapes of land, that the continents have been split apart, possibly more than once. For example, if you could push Europe and Africa flush against North and South America, they would almost fit perfectly together.

Creationist Dr. John Morris, however, dismisses a sudden splitting of continents as an explanation. He argues: “any scheme of rapid separation would itself cause havoc on the earth. If the Atlantic Ocean opened up rapidly, the destructive tsunamis, earthquakes and volcanoes would make life impossible on earth.”

We tend to agree with Morris on this. Had such an event occurred so soon after the catastrophic events bringing Noah and his followers through time to begin anew, we should have yet a second myth (memory) of escape similar to the flood story. Geologists and researchers that study plate tectonics tell us that \giant plates that are in constant movement under the surface of the planet. This is what causes earthquakes all over the world when these massive plates push into each other and something suddenly gives in to the pressure.

Yet the author of this story within the Book of Genesis clearly chooses to separate Peleg from the rest of the names in the genealogy of the family of Noah by saying that in his days was the earth divided.

The very name Peleg is similar to the Hebrew word Palag, which means “divided.”

Clearly something significant was going on in the known world during Peleg’s time. A careful study of Chapter 10 gives us an important clue. The genealogy breaks down into families of the three sons of Noah. Each family moved off into various parts of the known world and established small tribal kingdoms that later grew to be countries with apparent borders.

Even if they were not yet able to make paper and publish maps of the territory, the people of that day may have been very capable of establishing territorial jurisdictions. It seems to be human nature to do stuff like this and even go to war over border disputes.

After only five generations, when Peleg lived, it seems that the human race forgot its genetic and family links and was already drawing lines in the sand, marking territorial differences. The racial, religious and political bigotries were already being established.

Thus a conclusion by Morris seems most plausible. He wrote:

“The traditional interpretation relates Peleg’s day to the division of language/family groups at the Tower of Babel. Comparing the lineage of Shem, which includes Peleg, to the lineage of Ham, which includes Nimrod, leader of the rebellion at Babel, we find it likely that Peleg was born soon after the dispersion (assuming the genealogies are complete).

“Thus it would have been reasonable for his father Eber to name a son in commemoration of this miraculous event.”

Was a sudden and violent breaking apart of the continents the event that is being vaguely referred to in this strange Bible verse? An event like that would explain the vast divisions in the human population, history, race and language throughout the world. It would also help explain why ancient civilizations all over the world shared similar interests in building giant pyramids and why certain plant and animal species have been found on the European, African and American continents.