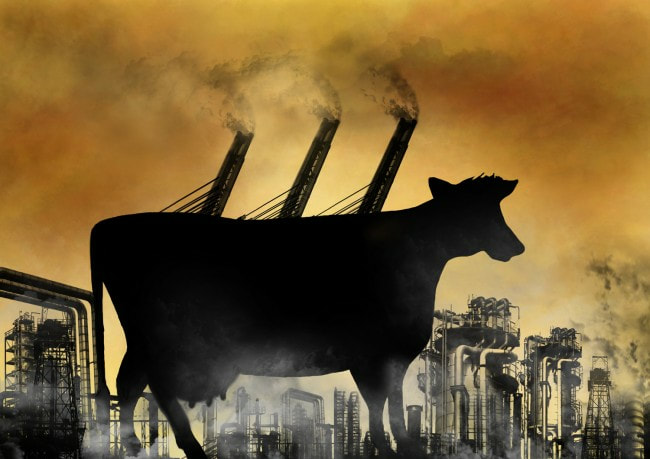 The Prospects Of Cow Power On The Farm

Critics have been poking fun at Rep. Alexandria Ocasio-Cortez’s Green Energy plan that includes controlling excessive “cow farts.” Her proposal is not a laughing matter, however, since studies have shown that a single cow can produce between 66 and 132 gallons of methane gas in a single day. And that doesn’t include the amount of methane produced from the piles and piles of cow manure that flows into farm recycling centers. Because of the nation’s demands for the milk products and meat, there are hundreds of thousands of cows grazing on the farms.

Methane is a serious problem since it collects more heat in the atmosphere than carbon dioxide. And the stench from livestock can be unbearable.So how to we plug the cow farts? Do we change the livestock diet? Do we make consummation of beef illegal?Back when I was working as a bureau reporter in Michigan’s Sanilac County, Carl Osentoski, executive director of the county’s Economic Development Corporation was thinking about this problem years before Ocasio-Cortez made it a national issue.

That was because that rural farming area was host to several industrial livestock operations and the obnoxious smells drifting over the towns were bothersome when the wind blew from the right direction.Osentoski’s job was to find ways to help the local economy and provide jobs. He took a serious look at the farm odors and came up with a plan to do something about it. He began working with the farmers and together they began exploring ways to turn all that methane gas from big animal farms into energy. He believed the technology may already be in existence to run farms and power the area with all that free methane.

"We are trying to understand the technology and the costs of these systems to see if they can be any benefit to the area," Osentoski told me. "We are just tinkering with this thing. We want to know who does this kind of stuff, what the costs will be, what the government guidelines are."

That process, using something called a anaerobic digester, was already being used successfully on dairy farms in other parts of the country.

"The technology uses microbes and bacteria to break down the manure into manageable by-products, including methane gas," Osentoski said. "The gas can be burned to produce electricity."

In Connecticut, brothers Matt and Freund were operating their 200-cow dairy operation on electricity produced from the farm's animal waste.

And in Princeton, Minnesota, Dennis Haubenschild's 760-cow dairy farm was using the same technology to produce so much power the farm was able to sell the excess. He claims his anaerobic waste digester supplies enough power to run the entire farm plus 78 average homes.

The exciting thing about this technology, Osintoski said, is that it promises to allow farmers to literally "generate" electricity as an agriculture product while reducing odor and creating a high-quality fertilizer.

Small wonder then that farm digesters have been attracting wide interest as mega-farms fill more and more of the rural landscape.

According to Ag Innovation News, a web information service, the process involves the use of heat and beneficial bacteria placed with cow manure and recycled newspaper bedding in a large digester tank that one writer said looks like a long white sausage.

As the manure is heated to about 100 degrees, the bacteria helps break the manure down, causing methane gas to collect under the tank cover. After a few weeks in the digester, the manure, which is less smelly, dumps into a storage lagoon for use as fertilizer.

The captured methane is burned in a retrofitted natural gas engine, which powers an electrical generator. The heat from the operation is recycled to warm the digester and the barn floors.

The Freund farm, using a smaller version of the same system, uses gas from the digester to fuel a hot water boiler that heats the home, offices and the digester, according to a story on Environmental News Network (ENN).

But there is more. The story said the Freunds were partnering with a fuel cell maker, Tor Energy Company, to use a fuel-cell system they believe will make enough electricity and heat to run their family farm on its own.

The Tor fuel cell uses ceramic-based electrodes that burn hot. The company believes its cell is the only one of its kind on the market that can run on methane.

The Freund brothers were so enthusiastic about the fuel cell generator they believed they would not only will have enough power to operate their farm, they may also be in a position to sell excess power to the local power grid.

There are two byproducts from fuel-cell electricity generation that also can be a benefit on the farm. These are hot water vapor and carbon dioxide.

The Freunds say they planned to use the hot water vapor to heat the buildings, thus eliminating the need for the hot water boiler.

They also planned to pump the carbon dioxide into greenhouses filled with vegetables and bedding plants. Plants thrive on carbon dioxide. They convert the gas back to oxygen through photosynthesis.

It all sounded like a perfect environmentally friendly plan to utilize a waste product to make power without burning coal, oil or natural gas. Instead it eliminates an obnoxious smelling methane gas from cow manure, makes power, and makes the neighbors happy.

Note that the energy systems promoted by Osentoski in those days were not designed to capture and utilize the energy from cow farts. And we are not sure how the farmers in Sanilac County have been dealing with his proposal to create energy from animal manure.