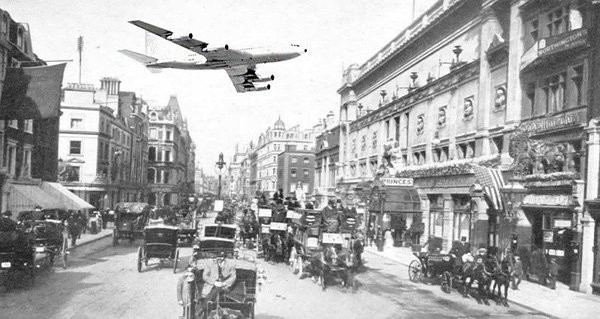 The stories of people stepping unexpectedly back in time are familiar to all of us. When I hear them there is always a strange sense of déjà vu and the hair seems to rise up in the back of my neck.

I am talking about peculiar slips in time, when people experience events, or catch strange glimpses of people, places, and moments out of the past. It is as if the ghosts of lost souls are stuck in that moment in time and reliving some event like a broken record that keeps playing the same bars over and over.

An article by Tim Swartz tells about an Australian woman who lived in a small town. She told of driving her car toward the main intersection of the town in 1997 and noticing a strange shift in the atmosphere around her. Suddenly she found herself on a dirt road, where there had been pavement, and the trees that lined the street were gone. Approaching from the other street was a classic old vehicle with a wild-eyed woman at the wheel. “As the car passed through the intersection the driver was looking back at me in total astonishment.” The woman was dressed in 1950s vintage clothing.

The woman said this same event reoccurred at least five different times during her occupancy in that town. Each time, she felt propelled back in time to that same moment, and met the same bug-eyed woman in the old car at that intersection.

She said the episode always lasts about 20 seconds before she finds herself back in the present moment. Each time it happens she tries to get more detail and once tried to make out the license plate number on the car. She said the plate was too dirty to read.

Another apparent time warp involving automobiles occurred in 1969 to a man identified in his story only as L. C. He said he and a friend were driving along Highway 167 when they passed an antique car in mint condition. It had 1940 license plates. As they passed the old car they noticed the driver was a young woman who had an expression of fear and panic on her face. L. C. called out to her and asked if she needed help and the woman nodded yes. He said he motioned her to pull over on the side of the road. As she did this, he pulled his vehicle over just ahead of it. But when it got out and looked back, nothing was there. The old car and the woman vanished.

Then there is the strange story told by members of the Palmetto Sharpshooters, a group of Virginia Civil War re-enactors, when they were camping on the night of June 5, 1996 on the southern edge of the Piedmont battlefield, waiting to celebrate the annual anniversary observance of the battle that occurred there.

At first the Sharpshooters thought they were being paid a surprise visit by another group of re-enactors. Some of the men actually walked toward the forest to greet the wagons as they came into camp. But when they reached the forest line, all the wagon movement and sounds stopped. For two or three seconds there was a dead silence. Then the birds began chirping and the forest came back to life.

The next morning the men searched that woods and found no road that the wagons could have traveled, and no sign that anything was disturbed. Close examination revealed the trace of an old road that had been there at the time of the actual battle.

Then there is the peculiar story about Orion Williamson, a Selma, Alabama farmer, who disappeared in front of his wife and two other people while walking out in his field in broad daylight. The incident happened in 1854 as Williamson was attempting to fetch his grazing horses.

At the time Williamson was walking across his field, a neighbor, Armour Wren and his son were passing in a buggy. Wren said he raised his hand to wave at Williamson and at that moment, Williamson abruptly disappeared. He was there one moment and gone the next. A thorough search of the field and the area failed to turn up any sign of him. Williamson was never seen again.

The Williamson story was so sensational it attracted the attention of journalists from all over the country. Among them was Ambrose Bierce, who later became one of America’s best known authors.

So what is going on here? It seems that time for those of us trapped in a three-dimensional existence is a means for us to measure our existence in this place, and get some perspective on an occurrence of events. If it is a creation within the matrix of our minds, then time is only an illusion. Thus it may be possible for people to step through time warps and catch glimpses of the past, or even step into another moment in time and not return.