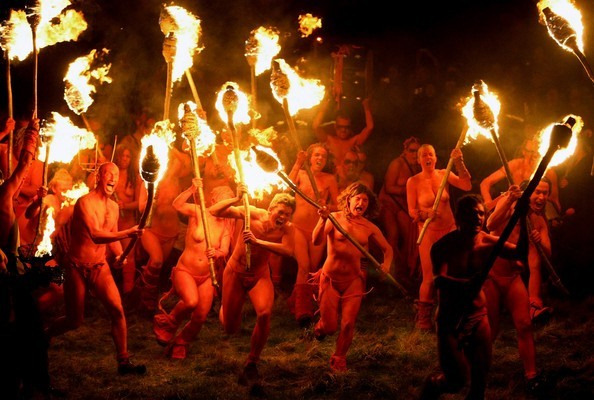 The Celebration of Halloween

As readers of this site have probably realized by now, we really like Halloween. It is among our favorite events, mostly because it has never been officially declared a real holiday, it has ancient Celtic roots and has not been adulterated to the extreme by Christianity.

Not that the Vatican hasn’t tried to attach its tentacles to Halloween. And of course, the day has been commercialized to the extreme with stores offering not only special candy treats and costumes for children to lawn decorations and even special lighting and sound recordings depicting screams, evil laughs and other scary noises. But in some ways, these things have only added to the fun of the night when all of the ghouls and goblins come knocking on people’s doors asking for treats to ward off the threat of a "trick" performed on the property under cover of darkness.

Even though it is a favored holiday for most Americans, Halloween has never been declared a national holiday. This should not be surprising since it is a celebration that has never been sanctioned by the Christian church. There are many hard-line right-wing fundamentalist Bible thumpers out there who would like to see Halloween trashed. It they could pass a law banning the celebration, they would probably do it. They perceive it as a devil’s holiday, a time when the witches gather around secret campfires and raise evil spirits.

So what are the origins of this strange celebration? It began as an ancient Celtic holiday called Samhain, a celebration of the last harvest, the end of summer, and for the Celtics, the first day of the New Year. The Celts marked the start of the New Year on November 1 because this was the mid-way point between the Autumn Equinox and the Winter Solstice.

The day also marked the beginning of the long cold winter. It consequently was a time of darkness associated with human death. The Celts believed that on the night before the New Year the veil between the worlds of the living and the dead became blurred. Thus Samhain on October 31 was a time when the spirits of the dead returned to earth.

These spirits were believed to damage crops, frighten people who dared to come out of their homes and cause so much trouble that the Druids built large sacred bonfires to frighten them off. They dressed in costumes, usually consisting of animal heads and skins as they gathered around the fires.

When Christianity reached Europe and spread into Ireland and Scotland, the Celtic people adopted this new religion. Strangely, the Roman Catholic Church in turn absorbed the Samhain celebration.

Before Christianity arrived the Romans conquered the Celtic territory and during the 400 years of Roman rule, the festivals of the Romans became blended in with those of the Celts. The Romans brought Feralia, a day in October when they commemorated the passing of the dead. They also celebrated Pomona, a tribute to the Roman goddess of fruit and trees. It was from this old holiday that the tradition of "bobbing" for apples on Halloween had its origins.

As the holiday evolved under the influence of the Romans and later the Christian church, its name changed from Samhain to Day of the Dead, then All Soul’s Day, All Saint’s Day, Hallowtide, Hallowmass, Harvest Home, Witches New Year, All Hallow’s Eve and then Halloween.

In the Seventh Century, Pope Boniface IV declared November 1 All Saints’ Day, a time to honor saints and martyrs. It was said that the pope was attempting to create a religious holiday to displace the Celtic festival. Instead of destroying Samhain, it merely changed the holiday. The people of Ireland continued holding big bonfires, wearing their costumes and playing tricks, but they called it All Hallows Eve.

People still practice the old Samhain traditions by dressing up as spirits on Halloween. While the adults gather for parties, the children roam from house to house seeking treats. The practice of leaving food at the door goes back to a time when people believed if they pleased the spirits they would be left alone during the long winter months.

There is a variety of other traditions and myths linked to Halloween that also have their origins in the distant past. The scary face in the jack-o-lantern, for instance, is another old custom that was supposed to frighten away ghosts and witches. It was believed the evil spirits feared fire. Originally the Celts posted a candle on top of a turnip. The candle later was moved inside the gourd, probably because an open candle was quickly extinguished in the night breeze.

The very name jack-o-lantern has Irish origins. There is an old folk tale about a man named Jack that played a trick on the Devil. To get back at Jack, the Devil threw a burning coal from hell. Jack used the coal to light his lantern and then roamed the earth in search of a place to rest.

Black cats, skulls and witches also evolved from Celtic beliefs. They believed witches used skulls to communicate with the dead and they received their power from black cats.

The Celts believed black cats were originally humans that were transformed by the witches.
​
Enjoy Samhein this season with an understanding of just what you are celebrating.