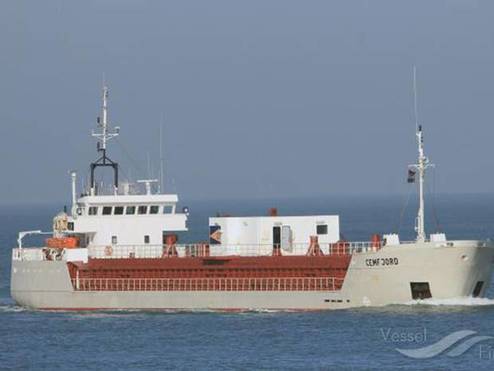 What Caused The Cemfjord To Capsize?

Gale force winds were forecast on the morning of January 2, 2015, when the 273-foot cargo carrier Cemfjord turned turtle on the open seas and sank off North Scotland. The disaster happened so fast and so unexpectedly that the ship never got off a radio distress call and none of the eight crew members had a chance to escape.

The puzzle about the Cemfjord is that it was laden with 2,000 tons of concrete and consequently riding low in the water with a lot of ballast when it encountered the storm. Yet when the wreck was spotted by the crew of the ferry Hrossey on Saturday, January 3, the freighter was floating upside down, with only the hull appearing above the waterline. The Cemfjord sank even as the ferry circled it, searching in vain for any sign of survivors. Only an empty inflatable raft was found.

The global warming phenomenon, which is triggering extreme storms all over the globe, may be blamed. A storm so powerful that it could flip a low-riding cargo ship full of cement almost seems impossible to fathom. Yet a storm like that occurred on the Great Lakes in 1913. That double storm, which packed hurricane force winds from two directions sank several loaded freighters. All were found lying upside down on the bottom of Lakes Huron and Superior.

The Cemfjord was a relatively new ship, launched in 1984. The owners, Brise Schiffahrt of Hamburg, Germany, said the vessel was safety inspected in December. It was manned by an experienced Polish crew and was making its way from Aalborg, Denmark, to Runcord, England, when sunk in the North Sea.

The report by the ferry’s captain touched off an extensive search of the area by sea and by air, but no bodies or survivors were found.
​
The wreck was found on the seabed in the eastern approaches to the Pentland Firth by the lighthouse tender Pharos. The crew was using sonar equipment to search for the Cemfjord.