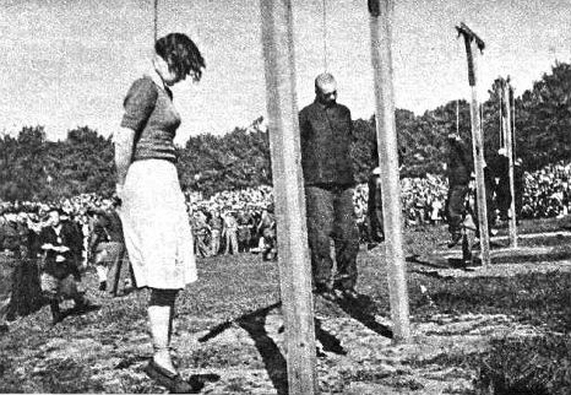 The Barbaric Act Of Execution

We wince at the very thought of some criminal in some far-away prison being “legally” put to death following conviction for crimes he or she may or may not have committed. We also find ourselves turning away from pictures of captured people in foreign lands being lined up before firing squads, or being beheaded at the blade of a sharp sword.

It is easy to rationalize when we see or hear of such things. We want to believe the person just put to death probably deserved his fate . . . that we are glad not to be in that person’s shoes. But what do we accomplish when we kill the killer? Does the hangman ever sleep at night?

A court in California recently ruled the state’s death penalty unconstitutional because convicted felons were forced to wait for years . . . sometimes decades, before the sentence of death was carried out. Federal District Judge Cormec J. Carney said the long waits were cruel and unusual punishment, a violation of the Eighth Amendment.

California authorities, like criminal case workers in many other states, appeared loathe to carry out death sentences because of recent problems in the current practice of lethal injection. Consequently there were 748 people living on death row in California at the time of Carney’s ruling.

The problem has been that prison staffers have been unable to administer the drugs correctly to bring about a “painless” death, thus several condemned men have suffered long and painful periods of dying while strapped to a gurney. The concept of first putting the prisoner to sleep and then administering chemicals that stopped the breathing and heart did not turn out to be as easy as it sounds.

Statistics have found that the death penalty, both in the U.S. and around the world, is discriminatory and is used disproportionately against the poor, minorities and members of racial, ethnic and religious communities. Since humans are fallible, the risk of executing the innocent can never be eliminated. Thus the  very act of carrying out a death penalty has come under fire again, as it has many times in the past. It is an ethical dilemma.

The old ways of executing condemned prisoners included the electric chair, hanging, a firing squad, a gas chamber or beheading. There are lots of ways to publically kill people it seems.

King Henry the Eighth, who was known for even executing a couple of his many wives, sometimes went to the extreme in disposing of people he considered traitors and mortal enemies. He sometimes burned them alive at a stake, dipped them head-first into large vats of boiling oil, or had them beheaded after letting them hang by the neck until almost but not quite dead.

Of course the Romans liked to hang their enemies alive on posts and let them remain there without food and water until they were dead.

The Nazis, Stalin, and Uganda’s Idi Amin Dada, believed to have executed over 500,000, usually lined people along freshly dug pits and machine gunned them to death. The Germans also were said to have used gas chambers in their concentration camps to kill large numbers of people at one time.

Indeed, the barbaric seed appears to remain in the human heart, in spite of how much we attempt to achieve a higher state of humanitarianism. That there is a movement away from the death penalty in the United States offers some degree of hope. But we have been there before.

The United States enjoyed a 10-year moratorium on prisoner executions from 1967 to 1977. Somewhere in that period the U.S. Supreme Court ruled the death penalty to be cruel and unusual punishment and overturned all existing death sentences. The high court then reversed that decision in July, 1976, and the killing was on again.

Since then, more than 1,400 offenders have been executed. The United States is the only Western country currently applying the death penalty.

Meanwhile, support for the death penalty has been on the decline. While 78 percent of the people polled said they supported in in 1996, the Pew Research Center reports only a 55 percent support for it now.