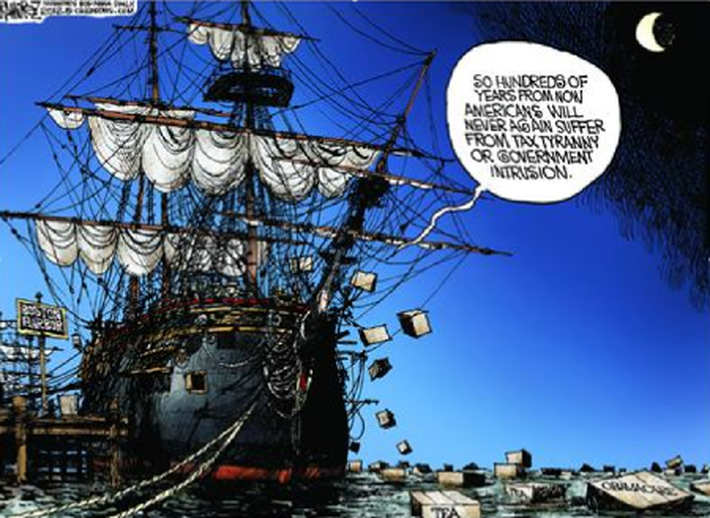 The July 4 celebration in the United States is always a day of parades, fireworks and public speeches about American pride. Every child knows that it marks the day we won our independence from Great Britain and our nation was born.

We think of General George Washington and the rag-tag army he led in the long hard eight-year fight against the British “Red Coats.” We hear the stories of the Battle of Bunker Hill, the men who drafted and signed our Constitution, and the Boston Tea Party, where men dressed like Indians boarded British ships in Boston harbor and tossed a cargo of tea overboard. The rebel symbol in that time was “no taxation without representation.”

A radical ultra-conservative band of Americans have adopted the name Tea Party to symbolize their protest against high taxation and massive spending by the contemporary U.S. government. The group has even adopted a historic flag once used by the American revolutionaries depicting a coiled snake and warning “Don’t Tread on Me.”

That Tea Party group is angry, and in a way it is for the right reason. But they have strangely joined the wrong side in their quest to do something about the problem. They have managed to get some of their members elected to legislative seats in Washington and are striving to cut spending . . . but for the wrong things. Instead of going after the real culprits . . . the big corporate war machine, banks and Wall Street . . . they want to slash spending for programs that are desperately needed by the people.

Thus while our roads and infrastructure all to ruin, and the people struggle to pay their high-priced medical bills and keep food on their tables, the government is throwing billions of dollars into unnecessary wars and maintaining the largest military the world has ever seen.

The Tea Party gang that raided the British ships in Boston Harbor was in revolt  against the unfair trade and tax policies used by the East India Trading Company, the biggest and most powerful corporation operating in the colonies in the Eighteenth Century. And as it is in the United States today, the East India Company was using finance to keep members of Parliament in its pockets.

The East India Company consequently dominated trade in the colonies. It was a shady deal by which virtually all members of Parliament were stockholders in the company. Many of them were getting very rich at the expense of the colonists who were not only forced to deal with this company, but were taxed heavily to support its practices.

This is what angered the colonists enough to cause them to rise up in revolt. Of course not all of the colonists agreed with the revolutionaries so there was conflict at the home front as well. That George Washington was able to hold his revolutionary army together and defeat the British was virtually a miracle. Had it not been for the help they received from France, both militarily and financially, the revolutionaries probably would not have won that war.

Not many Americans are aware that France, Spain and The Netherlands all joined forces and declared war against Britain at the same time the American colonists were fighting the “redcoats” on the East Coast of North America.

After the war, the states established rules making it a criminal offense for a corporation to contribute money in a political campaign, to buy politicians or to sway public policy. They never wanted their new nation to fall prey to the issues that they had to deal with while under British rule.

Over the years the states lost much of the power they had to a central government that was growing in strength. And as this was happening, the banks and corporations were also growing and beginning to get more and more involved in the politics of the nation.
By the time he served as President, Abraham Lincoln expressed his concern for the increasing power of the corporations. About this he said:

“The money powers prey upon the nation in times of peace and conspire against it in times of adversity. It is more despotic than a monarchy, more insolent than autocracy, and more selfish than bureaucracy. It denounces as public enemies all who question its methods or throw light upon its crimes.

“I have two great enemies, the Southern Army in front of me and the Bankers in the rear. Of the two, the one at my rear is my greatest foe . . . corporations have been enthroned and an era of corruption in high places will follow, and the money powers of the country will endeavor to prolong its reign by working upon the prejudices of the people until the wealth is aggregated in the hands of a few, and the Republic is destroyed.”