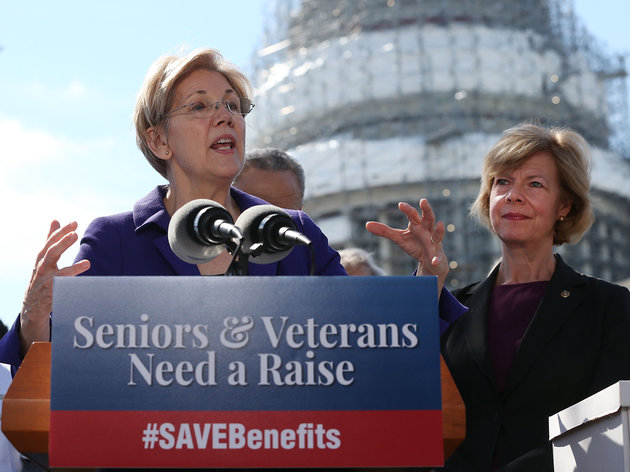 Warren Wants to Give Seniors a Raise

Democratic Senator Elizabeth Warren of Massachusetts knows GOP legislators twisted the books to take away a badly needed hike in Social Security benefits for seniors this year. And she has introduced a bill designed to do something about it.

Warren’s bill, dubbed the Save Act, would give an estimated 65 million seniors, veterans and millions of people receiving benefits from other programs a one-time cost-of-living adjustment of $581 per person.

The bill has 21 Senate co-sponsors and the support of about a dozen advocacy groups and citizen’s petitions bearing some 800,000 names supporting it. Warren introduced the Save Act last fall shortly after the government announced there would be no annual cost-of-living adjustment in 2016.

The adjustments are supposed to be automatic and based upon a national price index established by the Bureau of Labor Statistics in the Department of Labor. But Warren notes that seniors advocates and some economists argue that the consumer price index used to calculate COLA fails to accurately reflect the real living expenses of seniors.

That is because the index looks at the cost of housing, new cars, home appliances, gasoline and numerous other things that most seniors do not need or want. The nations’ elderly are saddled with the increasing cost of health care, medicine, rent, food and utilities. Even with the Affordable Health Care program launched by the Obama Administration and Medicare, seniors are faced with monthly co-payments for every visit they make to a doctor’s office and every prescription they purchase. Insurance companies refuse to cover some medications that the elderly really need.

Warren’s proposed payment amounts to a cost-of-living hike of 3.9 percent over 2015, which barely covers the monthly needs of seniors living exclusively on Social Security and Medicare. Some benevolent state programs and church groups are helping make up the difference in extreme cases where seniors must choose between life-saving medicine and food.

That $581 check might seem like small potatoes to some folks, but for people on the bottom of the scale, scraping pennies for their next meal, it could seem manna dropping from Heaven.
​
Where will the money come from to cover the payments? The bill also closes tax loopholes on executive compensation, including “performance-based” payment that can be deducted from corporate taxes. That is just one of the many complex ways the corporations and wealthy folks in the nation are sticking it to the poor.