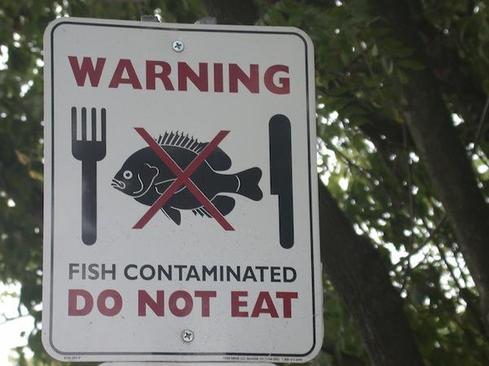 Our Sea Food Is Poisoned

It should be self-evident by now that those grand sea-food meals we once enjoyed are now laced with so much toxin that they no longer belong on our menu. Except for some areas of the North Atlantic and perhaps a few fresh-water inland lakes where human industrialization has not ventured, the consumption of fresh caught fish should be off-limits.

We have literally poisoned the creatures of the lakes, streams and seas all over the world. And the quest for more oil and gas reserves deep underground is intensifying the amount of toxins in world waters with each passing day.

There was a time, not many years ago, when fresh tuna, salmon, trout and other great seafood meals could be found in the wide Pacific. Since Fukushima, however, and the mass poisoning of the open sea with millions of gallons of highly radiated water, the radiation has found its way from Japan to the North and South American coasts. Diseased fish are now appearing in fishermen’s nets. California recently banned crab fishing off the coast because of high radiation found in these mollusks.

California’s official reason for shutting down crab fishing was dangerously high toxins from algae blooms in coastal waters. But was since revealed that the California Fish and Game Commission found the real danger is dangerously high levels of radioactivity resulting from the 2011 Fukushima nuclear disaster.

If the radioactivity is affecting the crabs, we can be sure it is in all of the creatures that exist in the Pacific Ocean. It is a disaster almost too big for us to absorb at first read. And it is only one small part of the overall effect the ongoing disaster in Japan is already having on the world. Efforts to stop the ongoing meltdown and spewing of radioactive toxins from the three destroyed reactors have been unsuccessful. So the poisoning continues and the spread of the deadly fumes in our air and toxins in our water intensifies with each passing day.

It is destroying the commercial fishing industry along the West Coast. It will eventually destroy the fish food industry all over the world. Eating fish from the Pacific is now too dangerous to try.

So what about crabs, clams and fish from the Gulf of Mexico? Even the local fishermen are warning people not to eat that now. Remember the Deepwater Horizon explosion and the blowout of an estimated 200 million gallons of crude oil into the gulf. British Petroleum then dumped highly toxic dispersants called Corexit 9500 and Corexit 9527 in the water in an attempt to break up the oil. What they accomplished was a mass poisoning of the gulf waters that has been killing all forms of marine life there ever since.
​
There is a natural river of flowing water in the Atlantic Ocean where water flows regularly from the Gulf of Mexico. In fact this flow of water is called the Gulf Stream. Consequently, much of the poison now killing and lacing the fish in the gulf with toxins is also spreading throughout the Atlantic.

When people wonder why whole schools of dolphins are being found dead on the beaches along the coast of Florida, we should not have to wonder what is happening to them. Blame Halliburton and British Petroleum for doing such a big job of poisoning those waters. The toxins won’t be going away for years.

If you think you can turn safely to the Great Lakes for rich catches of perch, muskellunge, trout and salmon, guess again. The State of Michigan has been warning about high levels of mercury and PCB’s that are being found in the fish caught in the lakes. There is a standing warning that fish lovers should reduce their consumption of fish from the lakes to no more than one helping a week.

A recent report noted that the federal Clean Water Act passed by Congress in 1972 has helped clean up the lakes, but industrial and agricultural toxins are still finding their way into the state’s lakes, rivers and streams. Even though state officials have attempted to clamp down on local industrial waste dumping, large quantities of both mercury and PCBs are literally falling out of the sky and into the water every year. Even if this problem could be solved and the input of toxins stopped, the US Environmental Protection Agency estimates it will take another 50 years before fish in the lakes will be safe to eat again.

Of course there is yet another source of seafood. That is the farm-raised variety. It would seem that fish farmers would offer a safe variety of fish to eat. But this is not the case.Farmed fish must be treated with pesticides to kill water lice and antibiotics to keep them healthy while growing up in cramped spaces. Much of their feed is animal feces, ground up small fish and corn. This makes these fish fatter and full of omega-6 fats, which are the kind we don’t want to eat if we want to avoid plugged arteries and heart disease.

The farm-raised fish then are also toxic . . . for different reasons. And consequently a rich diet of this kind of fish is also a dangerous food for us to be consuming.

It appears that money is more important to big business than a non-toxic drink of fresh water or a tasty plate of healthy seafood.