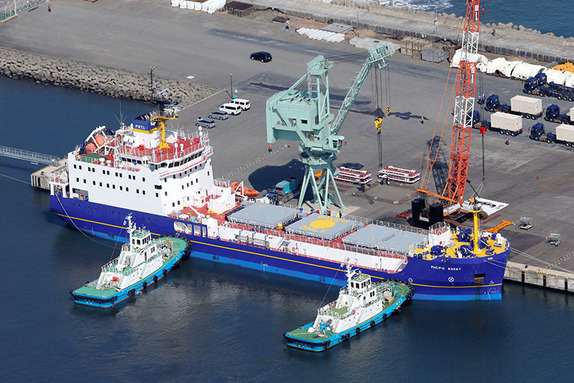 Transporting Plutonium To The U.S.

Two armed British ships were on the high seas this spring, loaded with 730 pounds of plutonium and bound from Tokai, Japan, to an American government facility on the Savannah River, South Carolina.

The ships, the Pacific Egret and Pacific Heron, operated by Pacific Nuclear Transport, are especially built to carry this deadly cargo. The heavy metal is created as a by-product of operating nuclear powered electric generating plants. It is extremely flammable when exposed to water and highly radioactive. Its only known use is for the manufacture of atomic bombs and some medical testing devices.

Efforts to use plutonium as a fuel to produce energy have proven unsuccessful.

The purpose for shipping plutonium from Japan to the United States has remained undisclosed for “security reasons,” although a source told a British newspaper that it involves a bilateral agreement for research and disarmament.

While Japan has 42 operational nuclear power plants, not all have been running since the Fukushima disaster. One report said that this storage of plutonium was sent to Japan from the United States and France to be used for research. Japan was in the process of building a major reprocessing plant to deal with spent fuel but the project became “trouble plagued” in the 1990's and was never completed.

The shipment was expected to be the first of a number of planned shipments of “at risk” plutonium currently stored in seven countries. There are 12 such shipments planned during the next seven years.

Probably for security reasons news reports are vague as to where these shipments will be sent (if they are all heading for South Carolina) and what is planned for such a massive stockpile of an estimated 900 Kg of this toxic material once it arrives.

The ships are heavily armed because of a concern for piracy by terrorist groups that might seek out plutonium to manufacture nuclear arms. Authorities say there is enough plutonium in those two ships to make dozens of atomic bombs.

In reality, the plutonium cast off from nuclear reactors operating at world power plants is really a waste product since it has few other known purposes. World leaders are attempting to achieve a major world nuclear disarmament in future years so the threat of human self-annihilation will no longer be present.

Bob Nichols, who maintains a website that measures radioactive isotopes released from operating nuke plants into the air over the U.S., notes that humans are constantly exposing themselves to a variety of dangerous by-products spewing from these plants.
He said there are 1,946 different radioactive isotopes released from every reactor “explosion” of uranium rods that occurs inside these plants. And there are 438 operating nuclear reactors in the world. The United States has 104 of them.

The plants get super-heated when running so the must have water circulating constantly to keep the excess heat under control. When the water cooling system gets disrupted it causes deadly melt-downs and explosions such as occurred at Fukushima in 2013.

So how much plutonium have these plants produced to date and where is it being stored?
A 1999 report stated that over 1,200 metric tons were produced since World War II. At that time, the world’s 260 tons of “weapon-grade” plutonium would be enough for 85,000 warheads.

Even then, over a decade ago, there were nuclear power generating plants operating in about 20 nations. Consequently, the amount of stored plutonium has probably more than doubled. The plutonium is all being carefully stored in cooled dry places and under heavy security. And the stuff has no purpose and no value to anybody unless they want to blow up the world.
​
The insanity needs to stop.