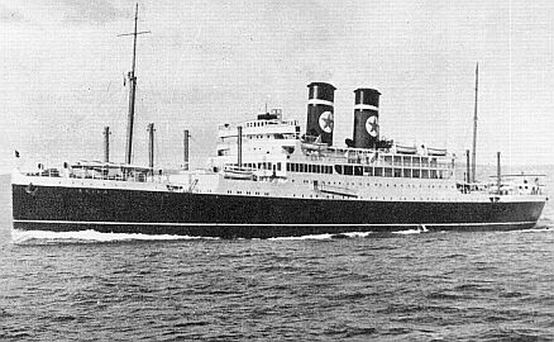 The Almeda Star A War Casualty With 360 Souls

The Blue Star Line passenger and refrigerated cargo ship Almeda Star became an early casualty of World War II when a German U-Boat torpedoed and sank it in a stormy sea on January 17, 1941.

The Almeda Star, under the command of Captain H. G. Howard, was steaming without escort from Liverpool, bound for a South American port, with a crew of 166 and another 194 passengers when it disappeared without a trace just west of the Outer Hebrides.

That position was sent in a final radio transmission from the ship which was a distress signal. The signal stated that the ship had been torpedoed. Destroyers and other ships were dispatched to search the area, but no trace of the lost steamer was ever found.

Even though England was already at war at that time, the Blue Star liner was not yet removed from company service for war duty, so was still operating as a passenger and freight carrier on the open sea. In fairness to the German submarine that sank her, the Almeda Star was armed and carrying a trained gunnery crew at the time it was attacked.
That final voyage began badly.

While moored off Liverpool on December 22, 1940, the ship was damaged in a German bombing raid. The damage, however, was not severe enough to prevent the vessel from setting sail on that fateful voyage. January 1941 is remembered as a month of severe weather on the North Atlantic. One gale followed another with dismal regularity, creating hardship for all ships at sea. Thus when the Almeda Star was struck by a torpedo, the seas apparently overwhelmed her so quickly, not a lifeboat was launched.

Since she was not traveling in convoy, and was not escorted, there were no witnesses, except possibly the crew of German Submarine U-96, to the Almeda Star’s final moments.
That submarine, commanded by Heinrich Lehmann-Willenbrock, was said to have been the vessel that sank the Almeda Star. Whatever that crew knew was forever lost when U-96 was bombed and sunk by U.S. aircraft at Wilhelmshaven.

The Almeda Star was a product of the Birkenhead shipyard, one of a new line of combination passenger ships that were added to the Blue Star fleet in 1926. They called the sister ships Almeda Star, Andalucia Star, Arandora Star, Avelona Star and Avila Star the "Luxury Five."
​
The ship was 578 feet in length and powered by four steam turbines that drove the ship on dual shafts and propellers. She also was a refrigerated cargo liner below deck, so could carry perishable products.