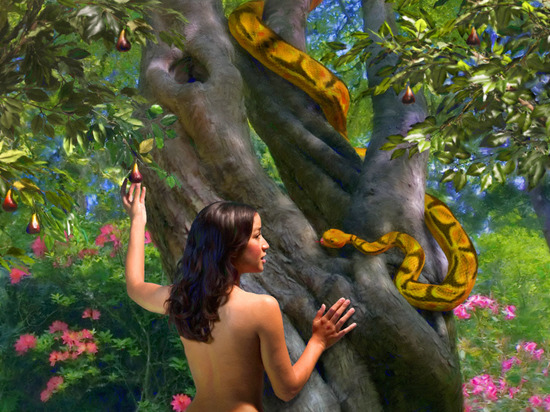 For God doeth know that in the day ye eat thereof, then your eyes shall be opened and ye shall be as God..” (Gen 3:5)

The story of how the fallen angel Lucifer, alias Satan, disguised himself as a beautiful serpent that tempted Eve into disobeying God and eating of fruit from the Tree of Knowledge of Good and Evil is the foundation of the false doctrine known as Christianity.

The story is a powerful distortion of fact, and cleverly told so as to promote the following doctrine:

--That the “archangel” Lucifer is a lying tempter that rules over the world outside the garden. This tempter seeks to capture the souls of humans and prevent their return to the light, or Heaven, after death.

--That Lucifer caused the woman to fall into sin first and thus caused Adam and all of their descendants to be genetically perverted. Thus all of mankind is consequently “born into sin.” The only way for us to escape and achieve salvation, or a release from the penalty of sin, is to submit to the will of an entity representing the great Creator God.

--That a “savior” in the form of a god-man would arrive and offer a way of escape from this terrible state. That savior is still being awaited by the Jews. The Christians believe he was Jesus Christ. Only by believing on this savior figure, and “accepting him into our heart (chakra)” can we expect to return to the spiritual existence we knew before we were born to bodies on this planet.
​
--That the blame for this mess lies on the shoulders of the woman. For this she is forever punished by being made subservient to men. The perversion that has resulted from this ugly doctrine alone has taken many religious groups down strange and twisted pathways.

Most of these doctrines are skillfully packaged within the 24 verses that comprise the Third Chapter of the Book of Genesis.

The drama begins in Chapter Two, verses 16 and 17, when God tells “the man” that he is free to eat all of the fruit found in the garden except that from one tree, the tree of the knowledge of good and evil.

Thus the line is drawn in the sand. If we are to believe this story, the subtle temptation is established by God instead of Lucifer. What child exists that would not fall victim to a challenge like that? “You can go anywhere in the castle except for one room. Do not, under any circumstances, open this particular door. If you do it, something horrible will happen. You will surely die.”

We might resist for a while, but we all know that eventually, our curiosity will get the best of us. The mystery door would pry on our thoughts. The day would come when we would surely open the door, if only to grasp a brief glimpse of the mystery that lies on the other side.

The analogy is exactly the same in the Genesis story. How could anybody expect a living, breathing, healthy human to resist such a challenge? The day was sure to come when either Adam or Eve would touch, smell, carefully examine, and eventually bite of that forbidden fruit. Once Eve submitted, it did not take Adam long to follow her. They both had been thinking about it long before they acted.

The truth lies deeply embedded in occult knowledge. The word occult means secret, or hidden, and not something wicked as religious groups would prescribe. The facts and the people who understand them have been driven into hiding by the power of religious-controlled governments.

A theory that an entity from another world or dimension, perhaps even Lucifer, came to Earth at some moment in history and manipulated the DNA of a humanoid primate, thus forming man in his image, fits in perfectly with the story. Thus Lucifer becomes, at least in the story presented by the angels, an evil one that tampers with the works of the Mother Earth, or “God.”

By manipulating the DNA of the innocent humanoid animal, Lucifer gave us the ability to “see,” or enjoy free will in the choices we make, and thus become like gods. Not only did he make us aware, and give us superiority over the animals, he gave us the power of reason, and magnificent bicameral brains that gave us the capability of mental evolution to a high state of consciousness.
​
Unfortunately dark forces intervened by inventing religious controls, through fear, that caused most humans to take the wrong path. Instead of evolving into the magnificent creatures we were designed to become, we made ourselves slaves of the lesser powers and of ourselves.