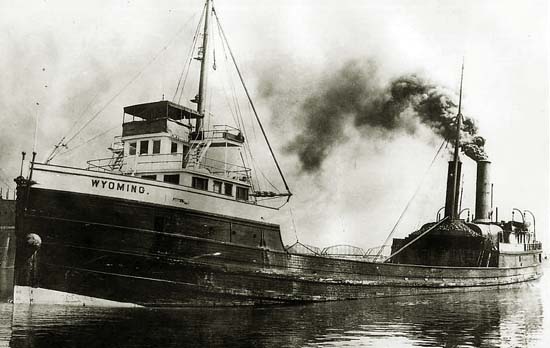 The Many Lives of the Steamship Wyoming

Details today lie buried in the dusty old newspapers of the late Nineteenth Century but from the records we know that the wooden steam barge Wyoming grounded, sank and was salvaged and resurrected numerous times before it burned off Pointe aux Barques, Michigan and sank for the last time on November 12, 1904.

What is unique about the Wyoming is that it was given a variety of profiles ranging from a side-wheeled steam barge when launched at Detroit in 1870 to an unpowered barge, schooner and finally a propeller-driven steamship at the time of its destruction by fire.

The only photo we could find of the Wyoming depicts it as a two-stack coal-burning propeller, the standard profile of the Great Lakes freight haulers of its day. She was a relatively small vessel, measuring just 147 feet in length. Vessel records state that it was lengthened from an original measurement of 119 feet at the time it was launched.

The Wyoming had its first face-change after striking a pile and sinking on the Saginaw River at Bay City in July, 1871. News clippings identified her skipper that season as Captain J. W. Hall. The ship was identified as a “steam paddle” of 150 horsepower. Her home port was Detroit.

The steamer was refloated and brought to Detroit for repair. It was back on the water again in October that same year when it stranded off Forester, Michigan, on Lake Huron. After this the engine was removed and the Wyoming became a non-powered barge in 1873.

The Wyoming seemed to be a hard-luck ship throughout its 34-year history. Salvagers, probably at Port Huron, raised the barge after it sank just north of the city in 1876. After this the hull was extended to 147 feet, masts were added and the vessel was rebuilt as a schooner in 1882. It was rebuilt once more and refloated as a propeller at AuSable, Michigan in 1891.

The record shows that the Wyoming sank one more time, again just north of Port Huron in 1892.
The Wyoming’s final trip occurred in November, 1904. She was bound for Goderich, Ontario with a load of lumber when caught in a winter gale off Pointe aux Barques. While battling the storm the vessel caught fire, burned and foundered. The crew was rescued by the Michigan based lifesaving service.

Her last owners were Shannon & Garey of Saginaw.