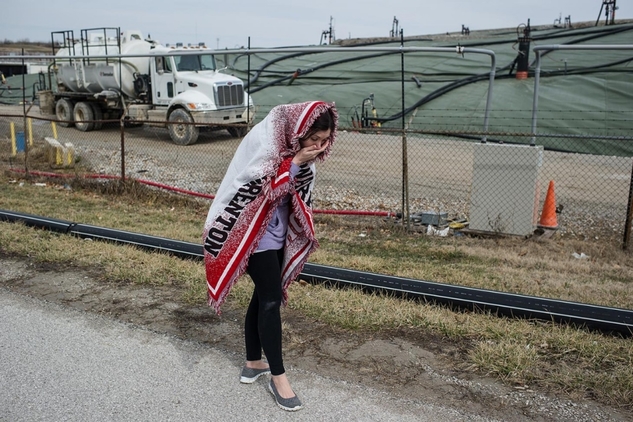 A smoldering fire that has been burning for years under a massive landfill northwest of St. Louis, Mo. is inching its way toward an estimated 8,700 tons of spent uranium and other nuclear waste that was secretly dumped there after the first atomic bombs were manufactured during World War II.

The material, generated by the Mallinckrodt Chemical Works as part of the Manhattan Project is a nuclear disaster as bad or possibly worse than Fukushima that is about to happen at any time, one writer on military affairs is saying on the website Veterans Today.

Author and former San Francisco news writer Bob Nichols said once the fire reaches the uranium it will become a hot nuclear inferno, burning at up to 10,832 degrees Fahrenheit and spewing a "devil's brew" of deadly radioactive isotopes over the city and surrounding area.

The U. S. Environmental Protection Agancy (EPA) and local government officials know about this threat but are apparently unable to decide what to do. A story by Matt Pearce, Los Angeles Times, noted that “corporate, federal and state officials don’t agree on what kind of threat West Lake Landfill poses to residents, or even if it poses a threat at all.” The EPA claims the fire isn’t threatening to reach the uranium and the agency is not willing to use the Superfund to have the toxic material moved. Others say that if it burns, it may emit a toxic plume that will force residents to stay indoors.

Nichols, however, says he believes the government is “throwing St. Louis under the bus” rather than risk public exposure to a nation-wide nuclear contamination that has been going on for nearly 70 years. He said the waste from the Manhattan Project was buried deep in the ground before the government established rules for the safe disposal of nuclear waste.

The Pearce story suggests that the uranium was not dropped at the West Lake Landfill until sometime in the 1970's, "after the site was approved as a Superfund site by the Environmental Protection Agency." At that time "it was officially identified as leached barium sulfate residue."

Landfill fires are not unusual. This one has been burning deep in the ground, under tons of rubble, for about five years. It is only recently that locals have learned about the uranium that has been lying in an adjoining dump site less than a quarter mile away, with nothing to stop the fire from reaching it.

Missouri Attorney General Chris Koster is suing Republic Services, owner of the landfill, in an attempt to have the toxic waste located and excavated from the site before the fire reaches it. But the case is not set to be heard until March, 2016, and Koster’s office believes time may be running out. His office believes the fire will reach the uranium within the next three to six months.

Dawn Chapman, a resident who has been organizing a neighborhood effort to get something done, says there is a foul smell coming from the landfill that appears to be affecting the health of some residents.

“I don’t understand why we’re just sitting back, as a city and as a nation, just letting this happen,” Chapman told a reporter for Al Jazeera.

While the EPA seems unwilling to budge on a local call to have the radioactive waste removed, there is a growing local effort to turn the problem over to the U.S. Army Corps of Engineers.

Al Jazeera noted that the Corps has located and cleaned up other radioactive waste under something called the remedial action program.

Nichols said he didn't think anything can be done at this point to stop the looming destruction of St. Louis because he believes the fire may have already reached the uranium.

He said the fire is now starved for oxygen. "Digging it up is not a good idea since that just exposes the burning garbage fire to more oxygen," he wrote. He said uranium will burn even without oxygen to help feed it.

Nichols said he believes the best thing the estimated 3 million residents of the St. Louis area can do now is flee.