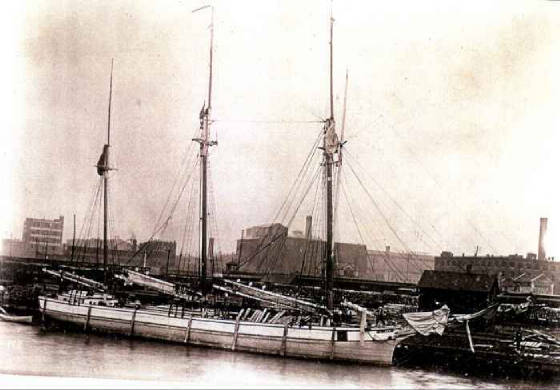 Tragic Capsizing Of The H. Rand

The 107-foot schooner H. Rand capsized in a gale in Lake Michigan, off Port Washington, Wisconsin, on May 24, 1901, killing the crew of four. Experienced sailors said they had warned the boat’s master, Captain Ralph Jefferson, that his habit of sailing with a short crew was setting the stage for disaster. They said a small crew was unable to handle a three-mast sailing ship like the Rand in a storm.

They appear to have been right.

The H. Rand was an old vessel, having been launched in Manitowoc in 1856. Records show that the schooner was rebuilt in 1875, enlarged and probably changed from two to three masts in 1879, and given major repair in 1880. The vessel was due for another refitting in 1901, the year it was lost.

The Rand was sailing from Boyne City, Michigan, for Milwaukee with a load of lumber when it was hit by a spring gale off the Wisconsin coast. The boat was found floating upside down by passing vessels the following day. The life boat was floating, also overturned, nearby, suggesting a frantic and unsuccessful effort to abandon ship.

Lost in the disaster were Captain Jefferson, 57, his daughter, Daisy Jefferson, 27, who served as cook, and crew members Frank Seabert, 27, of Sheboygan and Harry Lecrun, 17, of Milwaukee.

One old newspaper account said that the daughter, Daisy, had been cooking on the schooner for about ten years. Captain Jefferson often sailed with his entire family aboard. Fortunately, they weren’t along on the final trip. He and his wife also were the parents of two sons.

The derelict floated upside down and because the name was deep in the water, its true identity was unknown until May 29, five days after it capsized. Because it was a wooden ship carrying a cargo of wood, the Rand did not sink and remained a hazard to navigation.
​
The wreck was blown up after it drifted to shore near Racine.