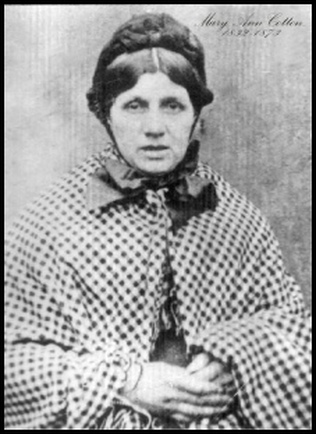 Among the annuals of the world’s most evil people lies the name of Mary Ann Cotton, an English woman who was hung in 1873 after being found guilty of poisoning three husbands, two lovers, her mother, at least eight of her own children and probably more than the 21 known victims.

She holds the distinction of being among the world’s first known serial killers.

Her motive? Cotton apparently did it for insurance money. Many of the children may have been killed just because they were a personal burdon. It was said she killed them all with arsenic.

She was born Mary Ann Robson in Sunderland in 1832. When she was 16 she moved away from home and worked briefly as a nurse in South Hetton, then later trained to be a dressmaker.

She married her first husband, William Mowbray, in 1852, He was a fireman aboard a steamship. While married to him the couple had nine children, seven of whom died from "gastric fever." Then William died of what was described as "an intestinal disorder" and Mary collected 35 pounds from his life insurance.

After Mowbray’s death, Mary Ann had a relationship with Joseph Nattrass. During this time another child died and Nattrass married another woman. She sent her remaining child, Isabella, to live with her mother and went to work at an infirmary in Sunderland.
Mary met and married a patient at the infirmary, George Ward. He continued to suffer ill health and died the following year of "intestinal problems." Mary again collected insurance money from Ward’s death.

Husband three was James Robinson. While married to Robinson a baby in the household, apparently born to Robinson’s former and deceased wife, died of "gastric fever." Then Mary Ann’s mother died of stomach pains, followed by her oldest daughter, Isabella. He became suspicious of Mary Ann when she tried to get him to buy life insurance and he found out she was stealing from him. At this point Robinson threw her out of the house. Consequently, he was the only husband to survive.

Temporarily desperate and living on the streets, Mary Ann soon fell in with Frederick Cotton who was living with his widowed sister, Margaret, who was caring for Frederick’s two children from a former marriage, Frederick Jr. and Charles.

After Mary Ann moved in, Margaret died from a stomach ailment. After this, Frederick Cotton and his oldest son died of similar symptoms. Mary Ann then took up with her former lover, Joseph Nattrass, who by then was no longer married. As soon as Nattrass purchased an insurance policy naming Mary Ann as the beneficiary, he died of gastric fever.

Mary worked as a nurse for John Quick-Manning, who was recovering from smallpox. She became pregnant by him with her twelfth child.

By this time Mary Ann was getting reckless. She boldly told a local official, Thomas Riley, that she thought Charles Cotton, the only surviving son in her relationship with Frederick Cotton, would probably "go like all the rest of the Cottons." Then when the boy died just five days later, Riley went to the local police and asked for an investigation.

An inquest was held and at first Mary Ann was found innocent of any wrongdoing. She told the court that Riley made the accusations because she had rejected his advances. But a local newspaper reporter began researching Mary Ann’s past and discovered all of the deaths she had left in her wake.

During a forensic investigation, a doctor that had attended Charles kept blood samples. When they tested positive for arsenic he went to the police. Mary Ann was arrested and charged with his murder.

There was a sensational trial. Local lawyer Charles Russell gained fame and the Cotton trial was the first of several famous poisoning cases Russell would be involved in during his career.
​
Mary Ann Cotton was convicted by a jury and hung at Durham Prison on March 24, 1873.