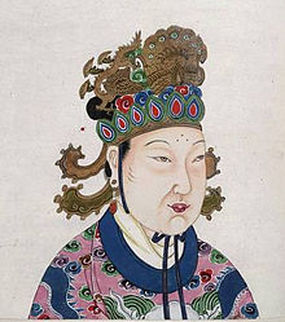 Believe it or not, China once had a female empress. She is known by historians as Wu Zetian or “Empress Wu.” As the story is told, she used sex and deadly force to gain her power and to keep it in what has always been a man’s world.

Wu Zetian lived from 624 AD to 705 AD and came to power during the Tang Dynasty. She began her ascension to power as a concubine to two successive emperors, managed to murder her family and any potential power figures that got in her way, and once taking power, maintained it by poisoning her opponents.

She left a trail of death and destruction in her path. But during her reign, known as the brief Zhou Dynasty, from 690 to 705, Wu brought forth a political and military leadership that resulted in a major expansion of China, where the borders were extended deep into Central Asia as well as the upper Korean Peninsula.

Wu Zetian was the mother of three sons, all of them succeeding her as emperor. A grandson was the renowned Emperor Xuanzong of Tang.

How did this one woman achieve so much? She was born Wu Zhao in a wealthy family in Lizhou, now known as the City of Guangyuan. Her mother was from the powerful Tang family and consequently, the Emperor, whose name was Gaozu, frequently came to visit the home. She grew up around royalty and had the opportunity to read books and study politics, government and music.

When she was 14, Wu was taken from her home to be a concubine of Emperor Taizong of Tang. Taizong died in 649 and Wu was consigned to Ganye Temple with expectations of being a Buddhist nun for the rest of her life. But Taizong’s son, Li Zhi, who succeeded Taizong, brought Wu back to be his personal concubine. This suggests that Wu was not only beautiful and intelligent, but may have had a sexual affair going on with Li Zhi long before Taizong’s death.

Ku Zhi took on the name Emperor Gaozong. He was only 21 when he came into power, but he was a sickly man. Wu quickly took on the title of Zhaoyi, which meant she was the highest ranking of nine concubines in the Gaozong empire. Also she progressively gained more and move influence over the empire throughout Gaozong's reign. It was said that Wu was ruthless in the way she gained power. Some historians believe she killed her own daughter to frame the empress and then her oldest son in a power struggle.

Wu accused Empress Wang of killing her baby, and later accused Wang and her mother of using witchcraft. This caused a fracas in the palace that led to the arrests of Empress Wang and her consort, Xiao. Wu was then named empress of the palace. Once she had that power, she ordered Wang and Xiao killed.

In the year 656, Emperor Gaozong deposed the son of Consort Liu from being hhis heir apparent and named Li Hong, Wu's son, as crown prince. This placed him in line to be the next emperor.

This was but the beginning of the political struggle for political power. Several high officials were opposed to the way Wu had manipulated the Emperor and there were murmurs of trouble. Wu began accusing these people with plotting treason. There were arrests and executions. She even had Prince Li Zhong, the first-born son to consort Liu, exiled and placed under house arrest. Eventually, no official in the palace dared to criticize the emperor.

In 660, Emperor Gaozong began suffering from severe headaches and loss of vision. Historians believe it may have been a slow poisoning by Empress Wu. As the illness progressed, Gaozong began allowing Empress Wu to make rulings on petitions by Chinese officials. It was discovered that Wu had an excellent understanding of both literature and history and was making excellent rulings. Some say her authority rivalled that of Emperor Gaozong.

Within the next few years, Empress Wu became so involved in the affairs of the government that Emperor Gaozong was worried. He consulted Chandellor Shangguan Yi, who suggested that he depose Empress Wu. He went so far as have Shangguan draft an edit to do this very thing. But Wu found out what was happening and and accused Shangguan, his son and other court officials of treason. They were arrested and executed.
Eventually when Emperor Gaozong was on his throne, Empress Wu sat behind him on the other side of a curtain. They were known as the "Two Holy Ones."

There followed numerous deaths in the Wu family. When uncles Wu Yuanging and Wu Yuanshuang, and cousins Wu Weiliang and Wu Huaiyun were given promotions, Wu Weiliang offended the family by questioning the promotions just because of their relationship to Empress Wu. Wu had them demoted and  exiled.

When Emperor Gaozong promoted the Lady of Han's daughter, naming her the Lady of Wei, and considered making her a concubine, Empress Wu had her poisoned and accused Weiliang and Huaiyun of the murder. They were executed.

As the health of Emperor Gaozong waned, there was a continual struggle in the court for succession of power. Strangely all of the people in line for the emporer's position died, were found guilty of crimes or committed suicide.

When Emperor Gaozong died in 683, Li Zhe, Wu's third son, took the throne for a brief reign as Emperor Zhongzong. But Empress Wu retained authority as empress dowager and regent. All of the other sons had been killed or sent into exile by this time. Within a few weeks, Wu accused Emperor Zhongzong family of treason and had him deposed from the throne and placed in exile. He reigned for only six weeks.

Wu then named her youngest son, Li Dan, as Emperor Ruizong. But he was in power by figurehead only. Wu remained the actual ruler. She no longer sat behind a curtain issuing commands, but sat openly with the Emperor when in court. In 690 Wu had Ruizong yield the throne to her and she established the Zhu dynasty.

During the first years of her reign Wu established a secret police who conducted a campaign of terror. Anyone that dared question Wu's authority was arrested and executed. She held onto her power with an iron fist.

She made good use of the concept of "suggestion boxes." Wu had copper mailboxes installed outside all of the imperial government buildings and encouraged people to report secretly on their neighbors. As messages came in, the secret police carried out tortures and executions of named people.

In the spring of 705, Wu Zetian was seriously ill and dying. Even then, there was a planned coup to take over the kingdom. Wu's generals intercepted, the leaders of the rebellion were arrested and executed.

At that time, however, the military leaders forced Wu to yield the throne to one of her sons, Li Xian. An edict was issued in her name to this effect, and Li Xian was named the crowned prince.

When Wu died on December 16 that same year, the Tang dynasty was restored. She was 80 years old when she died.