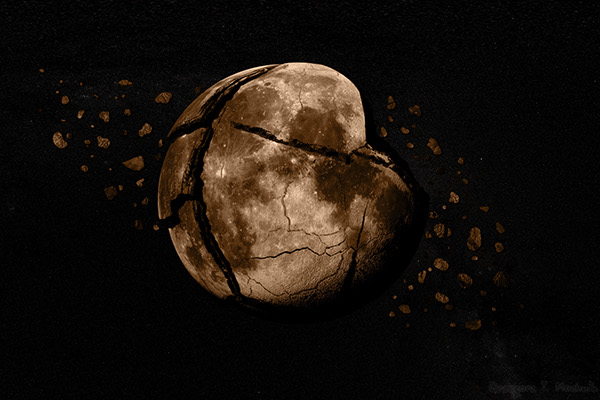 Could Our Military Ever Destroy The Moon?

Some years ago I met a man who told a strange story of a secret plan during the cold war years to blow up the moon.

The idea, he said, was to hold the world leaders under a looming threat of a destroyed moon. Such an act, if it could be done, would cause a general disruption of the Earth as we know it.

I regarded the story as one of the many wild extremist conspiracy theories that seem to be flying around and didn't take it seriously. But if it was possible to blow up the moon, it would have surely been a dastardly idea.

The moon’s gravitational pull controls the ocean tides, influences the mating cycles of world mammals, influences weather patterns and helps keep the Earth from wobbling out of control as it spins through space. Scientists believe it would take a while, but eventually the loss of the moon would spell disaster for Planet Earth and all living creatures living on it.

Thus the mere threat of blowing up the moon would give whichever nation reaching the capability of doing such a deed a lot of power over all other nations. When I heard the story I thought it plausible that such a plot may have actually been thought of.
My source told me it was a Russian plan. But a recent disclosure of U.S. military documents revealed a secret plan by our own country to blow up the moon with a nuclear bomb during the Cold War space race of the 1950s.

The project, known as Project A119," was designed to intimidate the Soviet Union right after their launch of Sputnik 1, the first known artificial satellite ever sent into space. The American’s were caught off guard by Sputnik, but we had Intercontinental ballistic missiles and nuclear bombs. Lobbing such a shot into the moon was something either the United States or the Russians might have done in those days.

Fortunately, the idea was abandoned and the Air Force concentrated its resources, instead, on passing the Russians and sending manned space craft to the moon instead.
Looking back on it now, we can all say that blowing up the moon was a stupid idea. But some military chiefs, realizing that America was suddenly involved in a space race that the Russians were winning, thought the sight of a great nuclear flash on the moon might terrify the Soviet Union and boost US confidence.

So could such a bomb have destroyed the moon, or possibly push it out of its orbit around the Earth?

The answer is no. At the time we did not have a missile powerful enough to carry the weight of a hydrogen bomb to the moon, so it would have been an atomic bomb. And physicist Leonard Reiffel, who worked on the project, said the explosion would have been too small to have had much of an impact on the moon at all.

Some researchers have estimated that a detonation large enough to actually destroy the moon would have taken something between 10 billion to even 10 trillion megatons of TNT. That is more than all of the existing nuclear arsenals in the world combined. Thus it would take the combined resources of all of the world nuclear powers and probably all of the long-range missiles in the world with the capability of carrying such a payload, plus the manufacture of a lot more nuclear bombs than we already have to accomplish such a dastardly thing. And why would we ever want to do it?
​
In case anybody is interested, the moon used to be closer to Earth in ancient times than it is today. And it is slowly slipping away from the Earth’s orbit, so in time, it may go flying off perhaps into the sun. But that is a long way off. The moon floats about three or four centimeters farther away every year. So it will be hanging around for a few billion years or so, even if we try to nuke it.