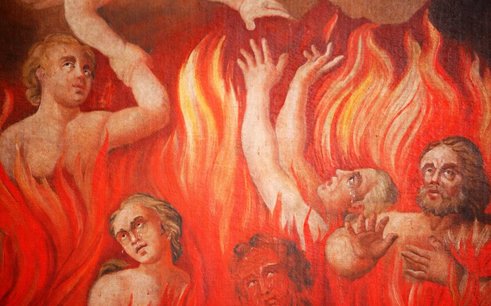 Is There Such A Place As Hell?

The basic Christian threat taught to children from the day they first begin attending church is that people who live a good and righteous life go to Heaven to be with Jesus, and sinners are tossed into a lake of fire called Hell to suffer forever.

A story like that scares the dickens out of children and many silly adults who go through life worrying that they may not be good enough to qualify for Heaven once they die. There is another part of the death story that is equally as frightening. This is the threat that after we die, we lie in our graves waiting to stand before God for a final judgment. When that day comes, we come face-to-face with our Maker, reliving all of the sinful acts committed during our time on Earth, and then face a final judgment. We either are rewarded and sent to Heaven or condemned to an eternity of fire and brimstone.

Stories like that evoke a great fear of death in people. I once knew a kindly old woman named Grace who ran a boarding house where I lived when I attended college. She and her husband were common folks who claimed to be Methodists but rarely, if ever, bothered to attend church. She could swear like a sailor but had such a kind heart all of the men living at her place shared a deep affection for her. Years after I knew her I met a Methodist minister who was at Gracie’s’ side on the day she died. He said she died a terrible death, literally screaming and clinging to his hand. She was convinced that she was bound for Hell.

It is common for older people to call pastors to their side while lying on their death beds. My mother-in-law did it. So did my grandfather. They had the pastors lead them through the Sinner’s Prayer, a confession of sins and a call to Jesus to come into their hearts. They are thus assured that they will enter Heaven since Jesus was supposed to have paid the price for their sins when He died on the cross and went into Hell on their behalf.

That is the “last ditch” escape route, commonly used by most people in the Christian world, to make sure they don’t accidentally end up in Hell.

That entire story of Hell has been a terrible scare tactic invented by the church as a way of keeping people on the “straight and narrow” pathway that supposedly leads to Heaven. The truth is that Hell is hardly mentioned in the Bible, references to such a place were made by Jesus in his parables but Bible scholars believe they were old myths used by Jesus as examples rather than references to a real place, and the real references to “eternal punishment in a lake of fire” dates back to ancient Egyptian and Zoroastrianism religious systems that existed long before Jesus ever appeared on Earth.

The Old Testament, the holy book of Judaism, makes no mention of hell or a punishment of eternity in a lake of fire. For the Jews the worst that could happen would be an eternity separated from God’s grace.

The Greek philosopher Plato probably gets the most credit for establishing the belief in the traditional view of Hell. But his Story of Er, which describes an afterlife in which sinners are punished in proportion to their misdeeds in life, do not describe a fiery pit hosted by a fallen angelic being. And Plato’s story is not supported by the Bible. Dante’s Inferno, however, appears to carry Plato’s story one step farther, thus giving humanity a full description of Hell as we perceive it today.

Oh what power great literature has over humanity when it circulates!

Thus we have it. There is no Biblical proof of Hell. It appears to be a figment of the human mind that has evolved from primitive beliefs . . . possibly stemming from the days when young virgins were sacrificed and thrown into the mouths of smoking volcanoes . . . and embellished over the years by such writers as Plato and Dante and a lot of poorly educated back-woods preachers.
​
Hell’s existence remains a myth to this day. And because the church has chosen to use it skillfully as a threat tactic, it continues to be fixed in the minds of millions of people all over the world.