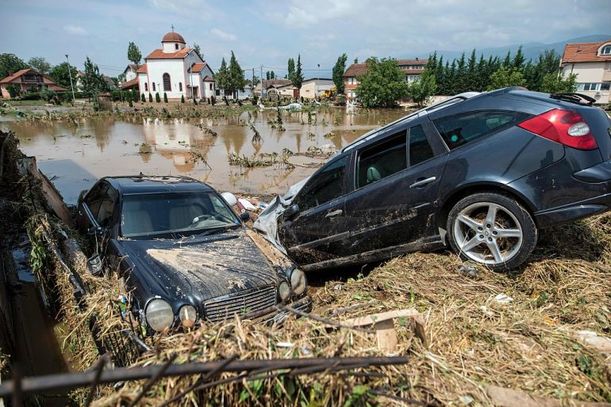 Extreme Flooding Should Be Big News

If you are in the storm and struggling to save your family, your home and escape alive it is big news for you and the people around you. But for the media the headlines are still focused this week on Donald Trump, the Rio Paralympics and of course, Pokemon.
For those of us not living in the storm laced areas, finding news of the flooding disasters if very difficult. The weather channel sites mention it.

We notice that the candidates are not talking about climate change. It seems to be a topic that the politicians, the weather people and the media in general have been forbidden to talk or write about. Why do you think this would be happening even as people all over the world are dying or escaping with only the clothes they are wearing in what are being called the worst storms in recorded history.

We noticed one headline for a report on the seven-inch deluge that wrecked homes and left two dead in Ellicott City, Maryland last week that referred to it as a 1,000-year storm. We think that may be worse than a 100-year storm. A broken sewer line caused millions of gallons of sewage to spill into the Patapsco River. The governor declared a state of emergency for Ellicott City and Howard County.

In the Far East, Typhoon Nida ravaged the Philippines last week then struck Hong Kong dumping seven inches of rain and blasting that city with 90-mile-per hour winds. Rainfall in the Philippines was reported at 11 inches. Businesses and schools shut down. The media reported 35,000 people were evacuated from Hong Kong. Later reports said the area was prepared for storms like this and damage was minimal. If seven inches of rain would cause so much damage in Maryland, we have to wonder what an 11-inch tropical rain and storm would do on the Philippine Islands. All is quiet on that front.

In Macedonia the capital City of Skopje, nearby Tetovo and surrounding areas 22 people died, over 60 were injured and four others reported missing after torrential rains flooded the area just over a week ago. Over 1,000 people were evacuated from their homes. Electric power was cut off. Officials said over 20 inches of rain fell within just over two hours. Flash flooding washed through homes and swept cars off the roads. The mayor of Skopje said it was the worst storm ever seen in the area. He said most of the water fell within the first 20 minutes. "It was like a water bomb has fallen," he said.

Even as you read this report a massive “slow-moving” storm is sweeping the Southeast United States, soaking Florida, the Carolina's, Alabama and Georgia, an area already saturated from heavy rains just one week ago. Meteorologists say the area will remain under a flood watch as a line of storms is expected to deliver from 15 to 25 inches of rain throughout the week.
​
Are these all one-in-a-thousand year storms? Are storms of this volume now becoming a bit more common? Can we blame global warming yet or is that still an unmentionable subject in Washington?