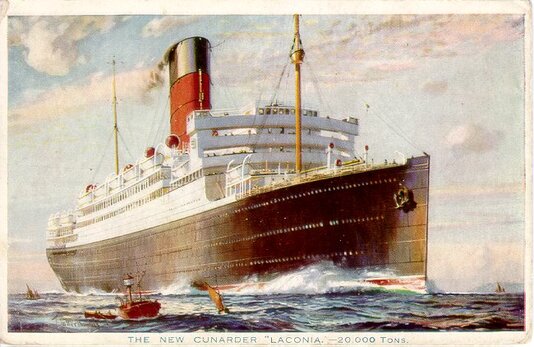 Impact Of The Laconia Incident

There was a time in the history of human warfare when soldiers in the field played by internationally accepted rules.

When the Germans first introduced U-boats on the open sea, for example, the men who sank the allied ships sounded notice of their intention, and gave passengers and crew members time to escape the targeted ship in lifeboats before a torpedo sent it to the bottom.

This kind of chivalry still existed even at the start of World War II. But it was abruptly halted by official German command after the sinking of the Cunard liner Laconia off the coast of Africa in the South Atlantic on Sept. 12, 1942.

Here is what happened.

The German submarine U-156, under the command of Lieutenant Werner Hartenstein, was on patrol just off the bulge of West Africa, about midway between Liberia and Ascension Island, when it came upon the liner. The sub’s torpedoes sent the 20,000-ton ship to the bottom.

When he surfaced, expecting to pick up a few survivors in the water and perhaps gather some key information to assist Germany in the war effort, Hartenstein was horrified to find the water teeming with hundreds of survivors.

It seems that the Laconia was carrying a crew of 136, plus 1800 Italian prisoners of war, 160 free Polish troops, 268 British soldiers and another 80 British women and children.

Horrified by what he had just done, Hartenstein mounted a remarkable rescue operation in which he kept his submarine on the surface for two consecutive days, and openly radioed for assistance from other German submarines, plus any other ships from any other nations that were in the area. During this time, Hartenstein promised not to attack and ask for enemy vessels to refrain from attack against him. 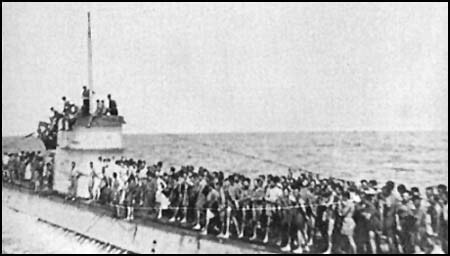 ​For a while, U-156 got the assistance Hartenstein asked for. Admiral Karl Donitz, then the head of submarine operations, also lent support by sending two other submarines to the area. An Italian submarine, the Cappellini, also joined in the rescue.

In the end, four submarines with people packed inside and standing on their decks, and with lifeboats in tow, brought hundreds of survivors to the African coast where they were expected to rendezvous with French surface warships.

Unfortunately, the Americans did not cooperate in the rescue. The four submarines were eventually spotted by an American B-24 Liberator, with Lt. James D. Harden in the pilot seat. As he flew over the vessels, with Red Cross flags draped across their gun decks, Harden received a radio message from Hartenstein asking assistance.

Harden turned away and notified his base of the situation. The senior office on duty, Captain Robert C. Richardson III ordered the B-24 to attack, thus condemning many of the Laconia survivors to their deaths.

Harden flew back to the scene and dropped depth charges. The attack forced Hartenstein to cast the lifeboats adrift and order the survivors on his decks into the water. He then dived and escaped. The attack cost the lives of hundreds of Laconia victims but did not sink any of the Axis submarines.

The French ships managed to re-rescue about 1,100 survivors later that day.

Because of the American decision to attack, Admiral Donitz issued the order that henceforth there would be no more rescue of survivors of ships sunk at sea. The American submarines were already operating under this same directive.

Thus the days of marine courtesy during war were over.
​