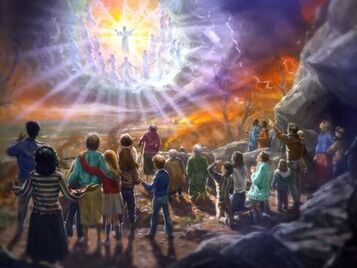 Waiting On The Messiah

As a strange form of insanity sweeps our overpopulated, polluted and poisoned world it should not be surprising that people of all religious faiths are looking for some kind of miraculous intervention by God to save us from ourselves.

It is well known that the Christians are waiting on the promised return of Jesus to launch a thousand-year period of peace. Contemporary “holy men” have stepped out of the shadows in recent years to either declare themselves to be the long-awaited savior, or to announce the signs of his arrival.

Believe it or not, one of these modern-day prophets was an Orthodox Jewish Rabbi, who died in 2006 at the age of 108. One year before his death, Rabbi Yitzhak Kaduri awoke from his sleep and declared: “The soul of the Messiah has attached itself to a person in Israel.” He said the Messiah was there to guide his people through a “time of trouble.” Then before he died, the rabbi said he had met this Messiah “and he will come shortly after the death of Ariel Sharon.”

Sharon, former Israeli Prime Minister, died on April 14, 2014, after suffering a stroke in 2006 and lying in a vegetative state for the next eight years.

There is yet another mystery surrounding the death of Rabbi Kaduri. While on his death  bed he wrote a note that he wanted opened and read one year after his death. Thus on January 28, 2007, the note, written in Hebrew, was opened and read. But its meaning is yet to be deciphered. It is a peculiar phrase, the initials spelling “Yehoshua,” which is a Hebrew name for Jesus.

Was this Rabbi telling us that Jesus is already in the world and about to make his appearance?
The messages were so vague we have to question the man’s mental capabilities toward the end. Why was a Jewish Rabbi so interested in the return of Jesus?

There are published proclamations, allegedly made by Jesus, promising a return at some future date but all were put in print hundreds of years after the disciples who allegedly heard these words were dead. Were they fabrications made by the religious scribes of King James in England?

Peter’s letter to the Thessalonians said: “For the Lord Himself will descend from heaven with a shout, with the voice of an archangel, and with the trumpet of God. And the dead in Christ will rise first. Then we who are alive and remain shall be caught up together with them in the clouds to meet the Lord in the air.”

This has been said to be a description of the “rapture” of the saints when Jesus appears in the sky. But this doesn’t sound like a Messiah living secretly among the Jewish people, waiting to make his public appearance known.

The Book of John, in the reported last words of Jesus before he ascended into the clouds, Jesus told his disciples: “Let not your heart be troubled; you believe in God, believe also in Me. In My Father’s house are many mansions; if it were not so, I would have told you. I go to prepare a place for you. And if I go and prepare a place for you, I will come again and receive you to Myself; that where I am, there you may be also.”

King Ben Purnell told his followers at the House of David in Benton Harbor something similar before he died in 1927. His body was preserved in a glass case on the cult compound for years until a fire ravaged the housing that housed it. Purnell didn't come back either.