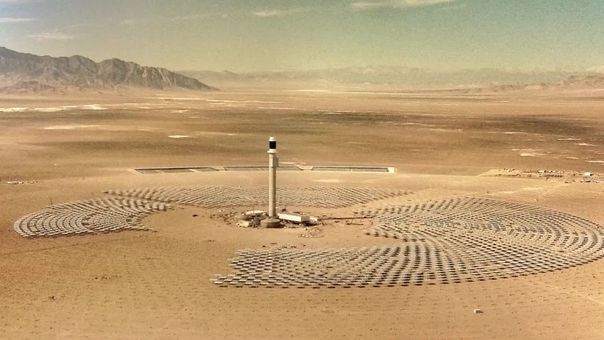 Energy From Sun And Sand

While the Middle East turned out to be a major source of crude oil during the industrial age, who would have thought that dry and sandy part of the world might remain a key source of alternative green energy when world demands changed?

Thanks to the engineers at Masdar Institute of Science and Technology, a graduate level research oriented university in the United Arab Emirates, an exciting idea for utilizing solar heat and desert sand to generate power is on the drawing table.

Utilizing a multi-billion dollar UAE investment in the project, researchers at the institute have shown that pure desert sand, composed of silicone and quartz, will store energy at over 1,800 degrees Fahrenheit in concentrated solar power towers. The facility uses mirrors to capture and focus the sun’s energy to heat the sand. That energy then can be used to heat water into steam and turn turbines to generate electricity.

The project, known as Sandstock, made this discovery after using X-ray fluorescence and diffraction techniques to study the composition of the Arab sand. The sand was found to contain a dominance of quartz and carbonate material that absorbs heat.

Anyone who has walked in bare feet over sun-heated beach sand on a hot summer day will attest to the fact that sand can get hot. Thus the concept developed at Masdar Institute is relatively simple when you think about it.

So why didn’t anyone come up with this idea before now? The answer is simple. While there was so much money to be made from burning carbon fuels from the Earth, alternative green fuel sources were not wanted and not in demand.

While we don’t know how the desert sands in the United States compare with desert sands in the Middle East and North Africa, researchers at Masdar and the World Bank are looking at their home turf as a center for generating enough solar energy to meet from 50 to 70 percent of the world’s electricity demand.
​
It is amazing to realize that the answer to the world's energy needs appears to have been right under our feet all along.