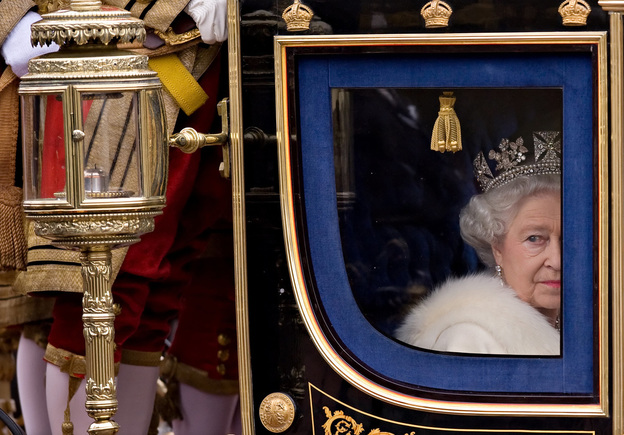 The Power Behind Queen Elizabeth II

People throughout Europe and North America appear keenly interested in the affairs of the Queen of England and her family even though she appears to reign over an ancient symbolic kingdom that no longer exists. But she hides a dark secret that is rarely spoken of.

That toddling 90-year-old woman that rides around London in gold-decked carriages and surrounded by sword-wielding and brightly dressed guards is among the most powerful people in the world. She is the head signatory of the House of Windsor Crown Temple within the City of London Corporation.

This frail little woman fronts for the powerful Rothschild’s financial holdings; she is the Head of State of the United Kingdom and 31 other states and territories that include Canada, Australia, Papua New Guinea, and New Zealand. She is then the legal owner of 6,600 million acres of land, or about one sixth of the Earth’s land surface.

The total value of the queen’s land holdings alone is estimated at 17.6 trillion pounds or just over $23 trillion in U.S. currency. Her personal wealth is estimated at 340 million pounds. The Royal Collection, which includes jewelry, works of art, Buckingham Palace and Windsor Castle are not her personal property but are held in trust.

Hidden behind all of the pomp of royalty is the Rothschild syndicate, which has a controlling financial interest in the City of London Corporation, the House of Windsor, and is a power figure for the Vatican and the Jesuits.

In 2010 it was reported by the mysterious Alcuin Bramerton on the henrymakow.com website that Washington D.C. entire “estate” is owned and controlled by the London Temple syndicate. He wrote: “At the present time, the London syndicate in partnership with an old family Chinese syndicate, hold, and have activated a $47 trillion World Court Writ of Execution and Lien on the U.S. Treasury and the US Federal Reserve Board.”
​
If this information is correct, it may just be that forces in London and China collectively own and secretly control all of the lands in North America north of the Mexican border. We might do well to bow to the queen with the Londoners when she makes her public appearances. The woman may just own us all . . . lock, stock and barrel.